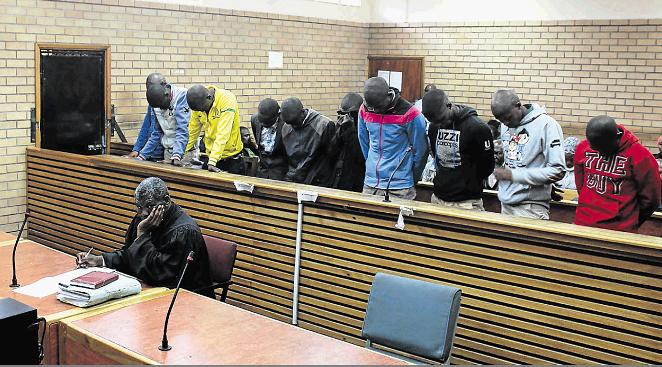 Fifteen youths will spend their lives in prison after they were sentenced to life imprisonment by the Mthatha regional court on Tuesday for “witchcraft killing”.

They killed the couple in Msintsini village in Libode on December 2 2015.

Magistrate Sizakele Sihlahla, also sentenced the murderers, all aged between 20 and 24 years, to 18 years on a second count of murder.Silulami, Qoyi and Seku were also sentenced to a further two years on a count of assault with intent to cause grievous bodily harm.

In addition, the trio along with Kwaza were sentenced to another two years for arson. But all the sentences will run concurrently to the life term.

National Prosecuting Authority (NPA) regional spokesperson Luxolo Tyali said that according to evidence presented in court, the murderers gathered near a bus stop shelter where they resolved to kill Nocingile, whom they believed was responsible for the death of their friend and relative who was due to be buried the following day.

The young man died in a freak accident by falling off a cliff a few days earlier.“Upon entering the [Gcelu family] hut, which was not locked, they went straight to Nocingile and started assaulting her with sticks and stabbing her with bush knives.

“When the husband, Dudu, tried to intervene, he was also assaulted and stabbed.

The couple’s 30-year-old daughter pleaded with the group to spare the lives of the grandchildren and she managed to escape and take them outside the hut through the window, but not before she was also severely assaulted,” Tyali said.

“The bandits then locked the dying couple inside the grass thatched hut and set it alight.”A total of 18 youths were arrested and charged with the gruesome crime, but three were acquitted during the trial due to lack of evidence.The15 pleaded not guilty and claimed to have alibis.

However, the state managed to prove their guilt beyond reasonable doubt through the testimonies of the surviving daughter and grandson, as well as another witness, who was present during the mob’s meeting earlier on the day.

“In his evidence, the grandson, who knew all the perpetrators as they are all from the same neighbourhood while some are his relatives, told the court that his grandfather was still alive when the group doused the hut with petrol and set it alight,” said Tyali.