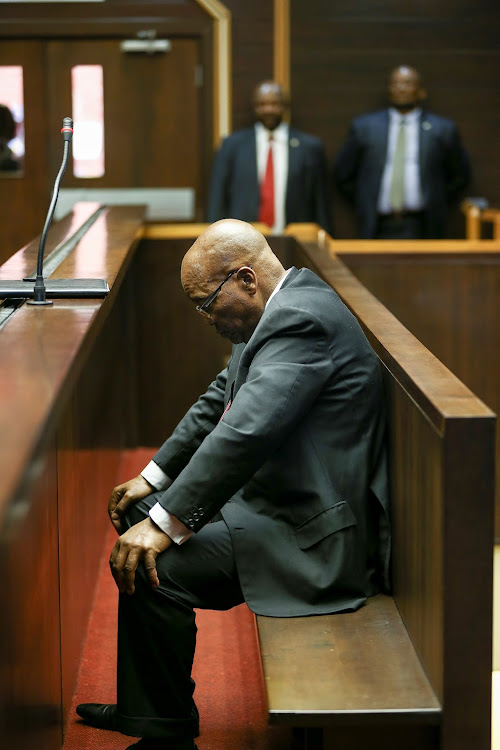 Former President Jacob Zuma walking out of Pietermaritzburg High Court to address his supporters after court proceedings against him.
Image: Thuli Dlamini

Former president Jacob Zuma’s latest corruption court appearance was interrupted by a power failure – which forced his advocate, Mike Hellens, to make his submissions to the Pietermaritzburg High Court in the dark.

The case is against Zuma and French arms company Thint. Thint is accused of corrupting Zuma. The case has been postponed to May 20. Both Zuma and Thint will then argue for the charges against them to be permanently dropped.

Thint has launched a separate legal challenge to the case against it, based on a number of legal technical grounds. Zuma’s lawyers argue the case against him has been irretrievably tarnished by undue delay and political interference.

Zuma looked unwell during the hearing, and left quickly to an outside waiting area after it was postponed.

Former ministers Faith Muthambi and Des van Rooyen, as well as former ANC spokesperson Carl Niehaus were among the people who arrived in court to support Zuma.

Following the court appearance, Muthambi took multiple selfies with fellow supporters and could be heard loudly telling Hellens – who also represents the Gupta brothers at the state capture inquiry – that “you must watch your back”.

She declined to speak to TimesLIVE about what she meant.

The case against Zuma is linked to events that played out from 1997, when a French arms company called Thompson-CSF, now known as Thales, scored a R2.6bn contract to provide four navy frigates to the SA government as part of the wider R60bn arms deal.

The state alleges that Thales agreed in 2002 to pay R500,000 to Zuma, then SA’s deputy president, for his “political protection” in any investigation – a deal allegedly brokered by his former financial adviser Schabir Shaik.

The state maintains that Shaik and his Nkobi Holdings made 783 payments to Zuma totalling over R4m in the 10-year period between October 25 1995 and July 1 2005. In return for these payments, the state claims, Zuma abused his formal position as MEC and as deputy president of the ANC to do unlawful favours for Shaik, who was jailed for his role in the matter, and for Nkobi Holdings.

In court papers filed earlier this month, Zuma suggests there could be innocent explanations for the meetings he held to allegedly unlawfully assist Shaik’s business interests.

He claims his corruption prosecution has been defined by political manipulation, undue delay and “blatant prosecutorial bias” – all designed “to prejudice me and declare me synonymous with crime and corruption”.

Former president Jacob Zuma’s appeared at the Pietermaritzburg High Court on Friday, November 30 2018, where his corruption case was interrupted by a power failure. The former president’s case was postponed to May 20-23 2019.