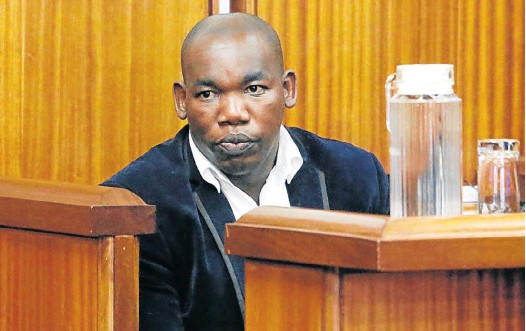 Luthando Siyoni in court at a previous appearance in November 2016
Image: Eugene Coetzee

The state is ready to take Luthando Siyoni to trial for the murder of Uitenhage school teacher Jayde Panayiotou.

On Thursday Siyoni’s legal representative Zolile Ngqeza confirmed to the Port Elizabeth High court that the trial date of August 12 had been accepted by both Siyoni and the state but asked that an earlier date be set so he could tell the court if Siyoni would still be able to cover his legal costs.

Siyoni, 37, a former employee of Jayde’s husband, Christopher Panayiotou, who is already serving a life sentence for arranging a hit on his wife, faces two charges related to his alleged role in the April 2015 murder of Jayde.

Siyoni was the first person to be arrested in connection with the murder after police received a tip-off.

Shortly after his arrest Siyoni quickly confessed the details of the kidnapping and the murder which were made in statements obtained from both him and his girlfriend at the time, Babalwa Breakfast.

After the trial Siyoni, who had turned state witness, was declared a hostile witness as he had changed his version of events and refused to answer questions put to him.

That led to him being charged with murder and conspiracy to commit murder.

After being charged Siyoni disappeared.

He was nabbed by police at his Kutali Street, Kwazakhele home in May last year after being on the run for nearly six months.

Judge Irma Schoeman postponed the matter to June 20 in order to ascertain if Siyoni would need legal aid representation or if Ngqeza would continue representing him.