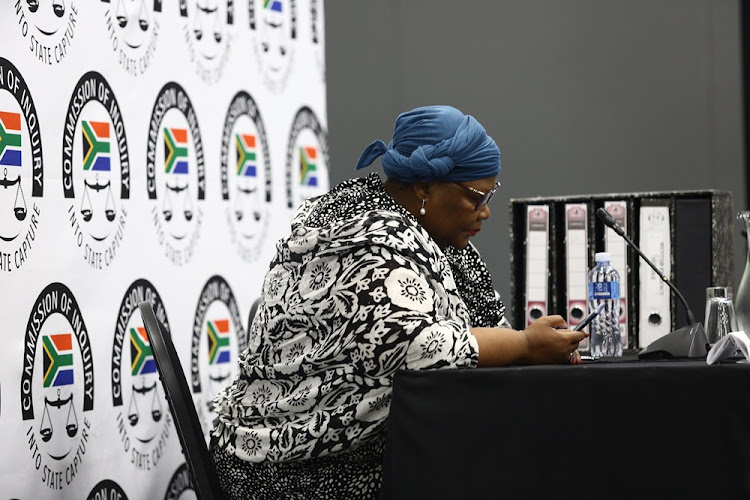 Former ANC MP Vytjie Mentor looks at her phone before the start of her cross-examination at the Zondo commission of inquiry into state capture in Parktown on February 11 2019.
Image: Masi Losi

Former ANC member of parliament Vytjie Mentor returned to the inquiry into state capture commission to be cross-examined this week.

She received backlash after investigators revealed her previous testimony did not add up. Here's what happened.

In her previous testimony in August Mentor revealed that she had met Atul Gupta while on a state trip to China. During Monday's testimony, the inquiry presented evidence including documents from the department of Home Affairs that showed the travel records of Duduzane Zuma as well as Atul, Rajesh and Tony Gupta and Mentor.

The travel records revealed that Atul was in South Africa at the time the visit to China happened.

A flight to Johannesburg

However, parliamentary records did note such flights - although none were on a Monday.

During her visit to Johannesburg she was taken to the Gupta compound in Saxonwold, Mentor said in her previous testimony. In December the commission's investigators, together with Mentor and structural engineers and architects, went on a site visit to corroborate her description of the house.

Investigators were looking for specific features that Mentor had noted, including that there were about four or five stairs leading to the main entrance of the house; a pillar by a large window in a waiting room; a mural on one of the walls; and a guest bathroom decorated with gold taps and gold mirrors on the walls.

On the site visit, the investigators found that there were 10 stairs leading to the main entrance. Mentor noted that the murals on the wall were different and the windows were not as large as she had remembered.