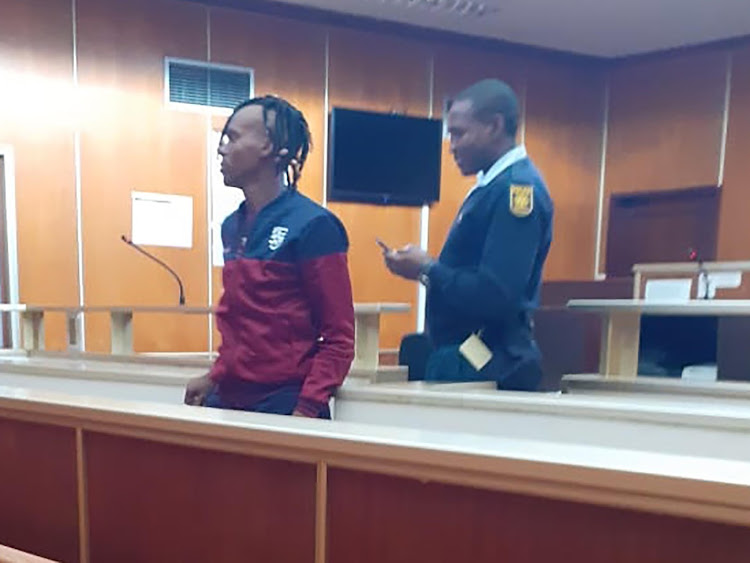 ‘BAD LIAR’: Aviwe Mbane is led to the holding cells after being found guilty of raping a 12-year-old girl by the East London regional court on Monday.
Image: JOHN HARVEY

A man who raped a 12-year-old schoolgirl three years ago cast his eyes to the ground as he was found guilty by the East London regional court on Monday.

Aviwe Mbane, 21, was 17 when he raped the child at her East London home in November 2016, but it was only some months later that she reported the crime, first to her home’s domestic worker and then via a letter to her class teacher at school.

Mbane, who wears his hair in dreadlocks adorned with beadwork, was dressed in a red-and-blue sweatshirt and blue trousers as magistrate Nomsami Mshunqane delivered his verdict.

At one point, Mbane sat down during the lengthy judgment, prompting Mshunqane to tell him to stand up immediately.

According to the state’s evidence, which included testimonies of the victim, her mother, her teacher, her school guidance counsellor and a woman who works for her family, Mbane entered the girl’s bedroom after she had left school having taken ill earlier that day.

After fondling her, he raped her, telling her not to tell anyone about what he had done to her. The girl’s sister and domestic worker had left the house to go shopping, leaving the girl alone in the house with Mbane.

During the trial, harrowing testimony was heard from the girl’s teacher, who explained how she had dropped a note on her desk in October 2017, informing her that she had been raped the previous year. The domestic worker also told the court how she had seen the girl crying, and when she asked what was wrong, the girl told her of the crime. A medical report confirmed that the girl had been sexually assaulted.

Mbane was the only witness for the defence. In denying the rape claim during his testimony, he also said he could not remember the sister and domestic worker leaving the house.

He also introduced statements that the girl had a boyfriend, although he never denied being in the house on the day she was ill.

Mshunqane said Mbane’s version of events painted him as a “bad liar”, and he also never challenged the victim’s evidence. By contrast, the girl was “vivid, competent and firm” during her in-camera testimony, and she stuck to her version throughout, Mshunqane said.

She was able to explain why it took months to report the rape, as she was informed that Mbane would not be coming back to the house. The child also had not been prompted in any way by outside parties, and volunteered all information about the crime.

On the other hand, Mbane “would say he was pondering questions, and then would give no answer”. “He also gave more than one answer at a time,” Mshunqane said.

The facts of the case showed the girl did not have a boyfriend, as claimed by Mbane, nor had any boyfriend visited her on the day of the case.

Following judgment, Mbane spoke briefly to a relative before being led away to the holding cells.

Mbane had been out on bail during the trial but Mshunqane ruled that he would now be remanded in custody until his sentencing on September 30.