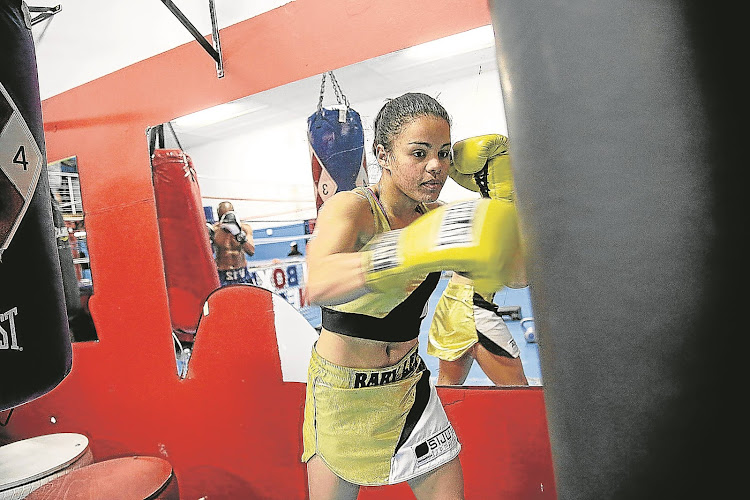 A witness to the cold-blooded slaying of East London karate and boxing champion Leighandre ‘Baby Lee’ Jegels told DispatchLIVE how the killer calmly got out of his vehicle and shot her three times in front of her mother and panic-stricken motorists on Voortrekker Road in East London on Friday afternoon.

And family members and friends of those killed in a collision, minutes later, with a vehicle driven by the alleged killer – a 37-year-old police tactical response team officer who was apparently Jegels’s boyfriend – have expressed their grief at the sudden triple tragedy.

The dead victims of the car crash have been identified as Peddie clinic nurse Aluta Olota and Hamburg librarian Siyasanga Dayimani, both 29.

Jegels’s mother, Rita, who was also shot, is in the intensive care unit at an East London hospital, where she was visited by premier Oscar Mabuyane and sport, recreation, arts & culture MEC Fezeka Bayeni on Sunday.

Ben Rexana, 33, a Daily Dispatch Local Hero, was travelling in the front seat of a minibus taxi that was behind the alleged gunman’s hired white Mercedes-Benz when the shooting occurred near the Da Gama textile factory turnoff at 2pm on Friday.

He got out and slowly walked towards her car with a gun in his hand.  He just fired three shots at her in the driver’s seat

Jegels, 25, was travelling with her mother in her white Volkswagen GTI to a gym session in Mdantsane.

Rexana told DispatchLIVE that the officer, dressed in blue shorts, a beige top and sunglasses, was “calm” when he killed Jegels.

“The guy was following the Golf and the car [Jegels’s Golf] quickly made a U-turn.

“The Benz also turned back but got stuck in traffic because it was very busy on the road on Friday.

“He got out and slowly walked towards her car with a gun in his hand,” Rexana said.

“No one would have thought he was going to do anything like that.

“He just fired three shots at her in the driver’s seat as if there was nothing wrong with what he was doing.

“He then turned around and looked at the other cars before going back to his vehicle.”

Rexana said Jegels’s vehicle drove on for a few metres before veering off the road.

“The Golf drove away for a short distance. The guy got in his car and followed her again but her car drove off the road.”

DispatchLIVE has established that Jegels had a protection order out against the man.

After the shooting, the officer, whose picture has been circulating on social media, allegedly drove off and then crashed into the vehicle that Olota and Dayimani were travelling in, killing them.

A third unidentified person in their vehicle was injured.

A suspect was arrested after the crash.

Dayimani’s aunt, Vuyokazi Dayimani, said: “He was coming home to Zwelitsha as he usually did on weekends.

An Eastern Cape world boxing and karate female champion has been shot and killed, allegedly by her policeman boyfriend.
News
2 years ago

“We were waiting for him to arrive so we could all leave together to go to Keiskammahoek for the unveiling of his grandmother’s grave on Saturday. He called one of his aunts who was travelling from Grahamstown [Makhanda] to ask her if she had already passed Peddie because he wanted to give her a lift. When it got dark, we started to worry because it’s unlike him to arrive home late.

“We called his phone and it was off. We heard there was an accident outside Peddie.”

The family did not learn of Dayimani’s death until Saturday. Olota’s family could not be reached for comment, but his friend, Phandulwazi Kubusi, said he had been travelling back home to Reeston.

“He was a humble guy, he did not wrong anyone,” he said, adding that Olota had a six-year-old daughter.

All calm before a ring firestorm

Independent Police Investigative Directorate spokesperson Sontonga Seisa said they were investigating the shooting. When asked why the officer had a gun despite the restraining order, Seisa said: “That is the internal processes of SAPS and we do not get involved in the operational dealings of the SAPS.”

Jegels’s trainer, Mla Tengimfene, said the family had requested not to speak to the media until Jegels’s mother was discharged.

Mabuyane called for a harsh sentence for the killer.

Karate trainer sees off beach muggers with a kick or two

Three muggers picked the wrong people to rob in an attack on the sand dunes about 250m east of the Eastern Beach lifeguard shack early on Saturday ...
News
6 years ago

“Even though a suspect is arrested, the arrest will not bring back to life this young girl who was everything to her mother, family, friends and colleagues.

“This pain is made worse by the fact that she was murdered in front of her mother, and allegedly by her boyfriend, a person who was supposed to love her; the same person is a police officer, who is supposed to serve and protect her.

“I hope the justice system will be harsh [in this case],” Mabuyane said.

The suspect is expected to appear in court this week.