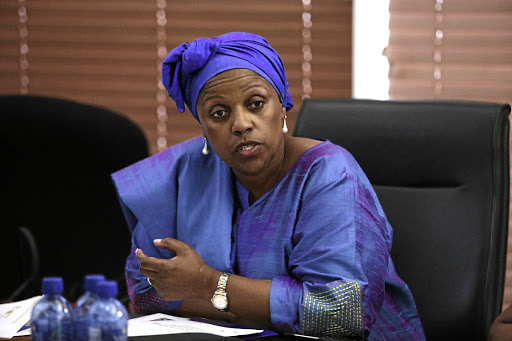 Dudu Myeni claims she cannot afford to travel to Pretoria to defend herself against charges that she was a delinquent director of SAA.
Image: Supplied

Former SAA chair Dudu Myeni says she cannot afford to travel to Pretoria for the delinquent-director case against her.

BusinessLIVE reported that Myeni was due in court on Monday, but the Organisation Undoing Tax Abuse (Outa) said she had called its legal team, claiming she could not afford to get to the capital city. Myeni’s residential address is in KwaZulu-Natal, but it is not immediately apparent if she was still in the province.

Lawyers for Outa and the SAA Pilots’ Association (Saapa) had to pass Myeni’s excuse on to the court because she did not have her own lawyer present, said Outa’s head of legal affairs, Stefanie Fick.

Last week it was revealed that Myeni’s lawyer had dropped her because there were no “financial instructions”.

Daniel Mantsha, who is former president Jacob Zuma’s lawyer, sent a notice of his withdrawal to Outa and Saapa’s lawyers.

Mantsha’s withdrawal followed Myeni's previous lawyers, ENS, dropping her as a client in June this year.

Earlier in September, Mantsha, after acting for Myeni in the matter for less than a month, tried to postpone court proceedings on the grounds that he was not ready.

Fick said Judge Ronel Tolmay rolled the case over until Tuesday this week to give Myeni a last chance to appear.

If she fails to appear in court the case was expected to continue without her.

In March 2017, Outa and Saapa filed an application to declare Myeni a delinquent director, arising from her actions as SAA chair from December 2012 to October 2017.

If she is declared a delinquent director she will be blocked from holding any position as a director in the future.

She is seen to be one of the people who was instrumental in the demise of the airline.

Myeni is also the chair of the Jacob Zuma Foundation and has been implicated in the state capture commission of inquiry.