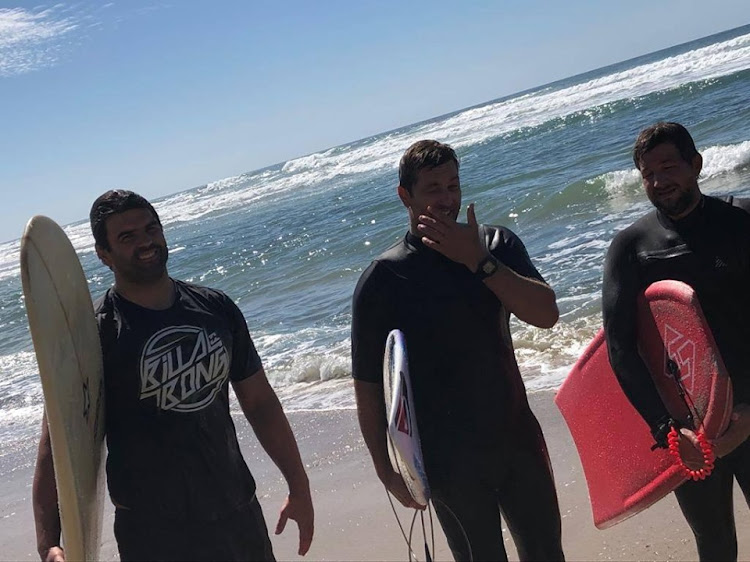 Surfers from left, Bradly Coetzee, JP Vaudry and Brian Mentz rescued one of the three swimmers that were caught in the rip current at Eastern Beach on Sunday morning.
Image: SUPPLIED/FACEBOOK

Three surfers piled in to help lifeguards and emergency services when three swimmers were caught in the rip current at Eastern Beach on Sunday morning.

They managed to save one person, who was taken to Frere Hospital, while the search, at the time of writing, was still ongoing for the other two.

Local adaptive surfing champ JP Vaudry was among the three surfers who assisted. He said they had been asked to help when the lifeguards also began to struggle in the strong current.

“We saw the fire engine and the commotion at about 8.30am and thought they had it all under control, but the lifeguards couldn't get further out to sea and were stuck in the rip themselves,” said Vaudry.

Buffalo City Metro has raised the alarm after another drowning at Eastern Beach on Saturday.
News
2 years ago

He said fellow surfer Bradley Coetzee managed to get one of the struggling youngsters onto his board while Vaudry and surfer Bryan Mentz went further out to search for the other two.

“We only managed to save one. We went out as far as we could, but we couldn't find anyone,” said Vaudry.

NSRI spokesperson Craig Lambinon said NSRI East London had launched their rescue craft at 8.15am to assist the emergency services and dive units.

Lambinon said the three swimmers were teenage boys  believed to be on a school tour from Middelburg.

BCM spokesperson Samkelo Ngwenya confirmed that one person had been rescued from drowning, but that emergency services were continuing the search for the other two.