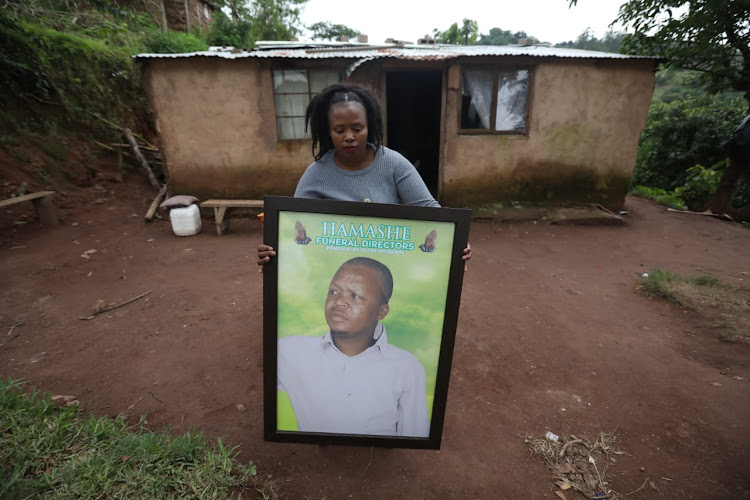 Thandaza Mtshali holds a framed photograph of her late uncle Sifiso Mtshali who was buried on Sunday. Mtshali was not married and had 38 children, whose names and contact details he recorded in a black notebook.
Image: Sandile Ndlovu

Banking and insurance group Old Mutual has asked to meet the Mtshali family after a video of them leaving the body of a family member at the company's offices in northern KwaZulu-Natal went viral. This followed the family becoming angry at a Old Mutual's delay in paying out on a funeral policy.

Thandaza Mtshali told TimesLIVE on Thursday that she had received a call from the insurer asking to meet her.

Mtshali said she had taken out a funeral policy with the company for her uncle Sifiso Mtshali, who had fathered 38 children.

“They called me yesterday and asked to meet today [Thursday] but I can't go because I am waiting for the MEC,” she said.

Social development MEC Nonhlanhla Khoza is expected to visit the family. Mtshali said she was unsure why the MEC wanted to meet her.

WATCH | Old Mutual, a 'corpse' and a claim: What you need to know

Mtshali and her aunt, Ntombenhle Mhlongo, were captured in the video dropping off Sifiso Mtshali's body at an Old Mutual branch in KwaDukuza, north of Durban, on Friday.

Mtshali told TimesLIVE on Wednesday that her uncle died after a long illness on Thursday, November 7. She put in a claim with the financial services company on Monday, November 11. Sifiso was buried on Sunday, with 13 of his children attending. The oldest child is 23.

Mtshali said Sifiso wasn't married and had the names, ages and contact numbers of all his children in a black book.

Old Mutual has since apologised but says that, according to their records, the payment was made before the family brought the body to the office.

“That funeral policy payment went through to the beneficiary’s Capitec account, for urgent clearing, before the family arrived with the body, but the SMS only reflected on her phone shortly afterwards,” Tabby Tsengiwe, Old Mutual’s chief communications officer, told TimesLIVE.

The company said in a release on Wednesday that they wanted to "engage" with the family.