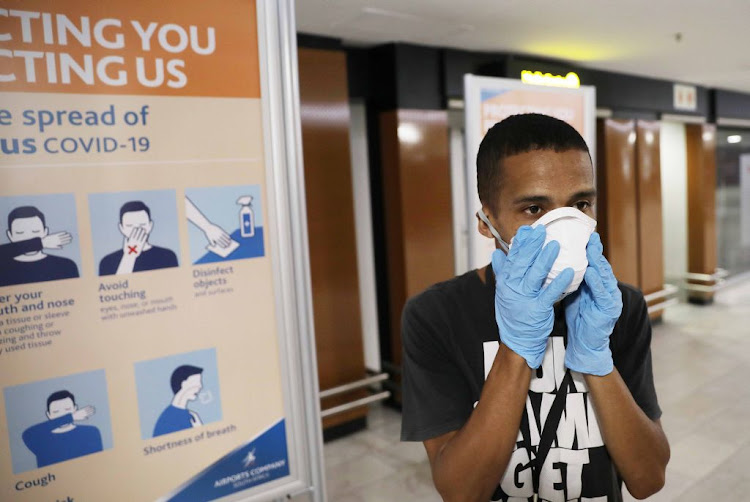 Health minister Zweli Mknize and justice minister Ronald Lamola have confirmed that if the coronavirus situation deteriorates, the South African government may consider declaring a state of emergency.

A number of ministers who form part of government’s response to the virus addressed the media on Monday morning on the measures announced by Ramaphosa on Sunday evening.

The council will be meeting at least three times a week and will also consist of senior government officials who will be released from some of their responsibilities as government looks to arrest a wide scale outbreak in the country.

Mkhize and Lamola emphasised that the declaration of a national disaster was the first step to try contain the spread of the virus.

Lamola said that the disaster management act enabled the government to suspend or limit some of the rights of citizens enshrined in the constitution.

Ramaphosa announced that gatherings of more than 100 were now prohibited and schools will be closing.

“Once this infection spreads in taxis, trains, informal settlements, it will create a new dynamic. We will need to create quarantine facilities if necessary. It means some might have to move out their homes.”

President Cyril Ramaphosa moved quickly and unequivocally on Sunday night to staunch the impact on South Africa of the global Covid-19 pandemic.
News
1 year ago

Netcare warns against criminals claiming to test for coronavirus

In a press release, Netcare said it is aware that criminals are going to homes claiming to be from Netcare or Netcare 911, and saying that they are assisting the department of health with door-to-door screening for Covid-19.

It reiterated that staff members from the Netcare Group, including from Netcare hospitals, Netcare 911 or Medicross medical and dental centres, are not doing door-to-door Covid-19 screening.

Should someone arrive at your home or business premises claiming to do screening for the novel coronavirus, do not allow them onto the property and alert the SAPS.

Organised business has pledged its full support for the measures announced by President Cyril Ramaphosa to combat Covid-19 and has called on its members to contain the virus.

“The president has made it clear what needs to be done, and we are all compelled to support him, as well as to reinforce the excellent leadership and management shown by health minister Zweli Mkhize and key health stakeholders such as the World Health Organisation,” said Sipho Pityana, president of Business Unity South Africa.

“We are urging our member organisations to ensure that the president’s measures are implemented as speedily as possible, and to increase awareness and positive action wherever possible. The president also referred to the potentially damaging impact on our economy that the Covid-19 virus will have. This will exacerbate the economic crisis we are already experiencing, and business will work with government and labour to pull resources and capacity together to mitigate the economic, health and social risks posed by the virus.”

Port Elizabeth’s St Dominic’s Priory School is on high alert after a parent of two pupils at the school came in contact with someone who tested ...
News
1 year ago

Ghana on Monday closed all schools and universities and suspended public events to stop the spread of coronavirus as a string of African nations imposed tighter restrictions to stem the spread of the global pandemic.

President Nana Akufo-Addo announced in an address to the West African nation that the authorities were shutting schools and universities “until further notice”. Public gatherings — including conferences, religious services, sports matches and political rallies — have also been suspended for four weeks, he said.

Ghana on Sunday announced it would start barring entry to the country from Tuesday for any non-Ghanaian citizen or resident “who, within the last 14 days, has been to a country that has recorded at least 200 cases”.

Liberia has recorded its first coronavirus case, a ministry official said on Monday.

“I can confirm that we have a case and we are managing it,” Chief Medical Officer Francis Kateh said. He did not provide any further details on the patient’s identity.

President George Weah is expected to make a speech later in the day.

Malaysia reported 125 new coronavirus cases on Monday, with most linked to a religious gathering attended by around 16,000 people.

The new cases bring the total tally to 553 in the country, which remains the worst affected in Southeast Asia.

Eastern Cape pilot Captain Bruce Finlay gives a first-hand account of the trip to Wuhan, China, to repatriate South Africans from the Covid-19 ...
News
1 year ago

Iran’s coronavirus outbreak on Monday killed a member of the clerical body that appoints the supreme leader, state media said, taking the death toll among serving and ex-officials to at least 12.

The official represented Tehran in the Assembly of Experts, an 88-strong body of clerics that appoints and monitors Iran’s supreme leader. At least 12 Iranian politicians and officials, both sitting and former, have now died of the illness, and 13 more have been infected and are either in quarantine or being treated.

The virus also killed a prominent economist and political activist on Monday, according to the semi-official news agency ISNA. Fariborz Rais-Dana, 71, succumbed to the illness after being hospitalised for six days, ISNA reported.

Iran has been scrambling to contain the rapid spread of coronavirus which so far has infected nearly 14,000 people and killed over 720, according to official figures.

After more than a year without a full government, Belgium’s bickering parties have agreed to back caretaker prime minister Sophie Wilmes and give her “special powers” to fight the coronavirus.

Attempts to negotiate a new ruling coalition will be suspended for six months so that 10 parties — excluding the Dutch-speaking far-right and the French far-left — can unite behind her effort.

Belgium’s King Philippe must give his accord and then parliament will hold a confidence vote on Thursday. “From a government overseeing current business, we’ll head into a government with full authority... a government with a limited programme,” Senate President Sabine Laruelle said.

The coronavirus is spreading quickly in Belgium, with 886 cases recorded by Sunday, 300 more than two days previously.

Safety of patients at EC hospitals not guaranteed

Despite staff and patients having been threatened in the past, it is remarkably easy to gain access to the hospitals of the Eastern Cape without ...
News
1 year ago

United Airlines said it would announce a cut in capacity of around 50% for April and May, as the United States ramps up restrictions to try and contain the spread of the coronavirus.

“We also now expect these deep cuts to extend into the summer travel period,” said chief executive Oscar Munoz and company president Scott Kirby in a letter to employees published on the airline’s website on Sunday.

In the first half of March — usually the busiest month of the year — United had “welcomed more than one-million fewer customers on board our aircraft than the same period last year.”

The airline has begun speaking to unions “about how to reduce our payroll expense,” it said, acknowledging this would be “painful” but that senior staff had already been told their salaries would be halved.

American Airlines said it would reduce all international capacity by 75%. “This suspension will last through May 6,” the carrier said. “This change is in response to decreased demand and changes to US government travel restrictions due to coronavirus.”

Its competitor Delta said it would “significantly reduce its US to Europe flying beginning on Monday, following the US government directive restricting travel between the US and Europe.”

Southwest Airlines said it “will likely make service reductions based on demand.”