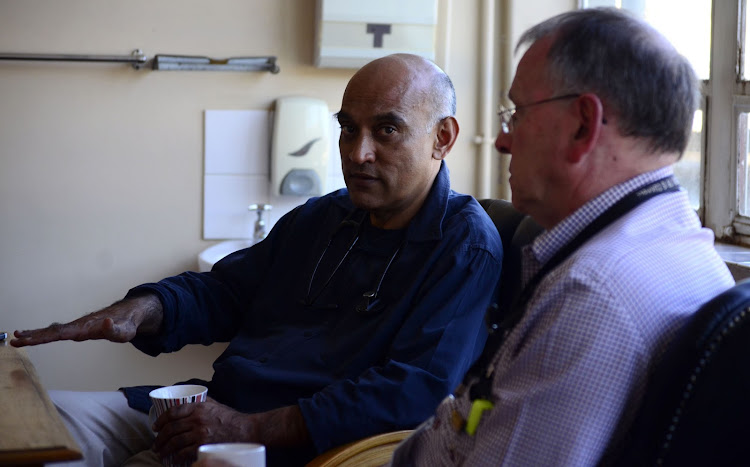 The North West health department says it has suspended Dr Ebrahim Variava from his post because of his 'unprofessional conduct'.
Image: Tiro Ramatlhatse

The North West health department on Thursday confirmed that the Klerksdorp-Tshepong Hospital, the designated treatment facility for the coronavirus in the province, is without a head of internal medicine after it placed Prof Ebrahim Variava on precautionary suspension.

In a statement, health MEC Madoda Sambatha said he had suspended Variava due to a series of serious allegations against him, which the department labelled as “unprofessional conduct”.

Listing the charges, the department said he had “acted against current Covid-19 guidelines, compromised the limited number of test kits and acted in a manner suspicious of unapproved research.”

The department also said Variava had shown “failure and disregard of administrative protocols”, such as “requesting computers from [an] NGO and instructing that they be installed in the wards without any approval”.

It also accused him of being “obstructive to management of the hospital in all meetings planned to prepare for Covid-19”.

Variava was also accused of “failure to act as part of management through a tendency to write e-mails to stakeholders, including external ones such as the media, [public interest law centre] Section27 and different national government departments, without any effort to engage internal problem-solving mechanisms or allowing management time to resolve issues.”

Sambatha said he had placed Variava on precautionary suspension so that he does not meddle with their investigation.

“This type of suspension means the employee still receives a full salary and benefits while suspended,” he said.

It was not immediately clear whether Variava might be reinstated.

The department said labour law did not prescribe any minimum or maximum time for suspension, only that the period of suspension should be fair and reasonable and that investigations should be completed as soon as possible.

A proposal has been put forward to Eastern Cape premier Oscar Mabuyane to change the approach to Covid-19 testing because glaring flaws exist in the ...
News
2 years ago

“The alleged unprofessional conduct of Prof Variava has threatened labour peace at the time when it is most needed in the face of Covid-19,” said Sambatha.

“The implications of his alleged unprofessional conduct is such that as a result of Prof Variava allegedly testing four nurses and 36 patients without reasonable grounds, labour unions demanded explanations of the policy on testing, wanting to know why all nurses are not tested.”

Sambatha said once the department had completed its investigation, Variava would be called for a disciplinary hearing, chaired by an independent body, where he would be afforded an opportunity to plead his case.

“Prof Variava’s contribution to the [North West department of health] is appreciated. However, it is incumbent on an organisation that is striving to instil fairness, discipline and labour stability to investigate the above allegations.”

A group of Variava's colleagues have meanwhile shown their support for him by launching a campaign calling for his suspension to be overturned.

In a statement, the group said the suspension had “shocked his clinical, teaching and research colleagues”.

“We feel none of the poorly drafted charges bears any relation to Prof Variava’s conduct and dedication to both patient care and academia,” they said.

Instead, they said, Variava has been vocal about the shortcomings of the health ministry.

“He has raised concerns to the leadership of the North West department of health about repeated and lengthy drug stockouts, particularly of frequently used antibiotics for common infections and medications required for patients in ICU.

“When it appeared that no one was listening, as recommended by the findings of the Life Esidimeni inquiry, he raised the issue on other platforms.”

The group emphasised their concern at Variava being suspended at the height of the coronavirus pandemic. They called for the department to withdraw his suspension, saying this would be in the best interests of the hospital and its patients.

A proposal has been put forward to Eastern Cape premier Oscar Mabuyane to change the approach to Covid-19 testing because glaring flaws exist in the ...
News
2 years ago