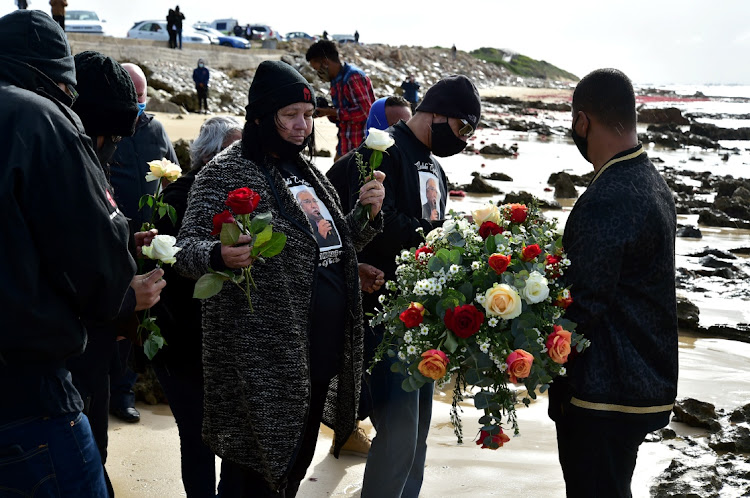 A memorial ceremony in honour of police reservist Captain Garth Rademeyer was held at the beachfront on Saturday.
Image: EUGENE COETZEE

The police and those in the safety and security fraternity braved the cold and rain on Saturday to hold a send-off for late police captain Garth Rademeyer.

The captain’s final convoy, led by his family, started outside St Thomas High School in Gelvandale at midday and ended at the beachfront opposite the Humewood Golf Club.

A short farewell service was held on the beach before his ashes were scattered in the water.

Rademeyer died of a heart attack in his Gelvandale home on July 6. He was 66 years old.

Speaking at the beach, Rademeyer’s daughter, Nicky Harmse, said the family was comforted by the knowledge that he had lived his life fully.

“He was such a disciplinarian and between him and my mom, who is [the opposite], we were just always caught in the middle.”

“As a reservist, you are expected to work 16 hours a week, but my dad worked those 16 hours in a day, so when he said he was tired last week, we believed him.

“We aren’t crying like people who have no hope. We know where my dad’s [spirit] has gone because we know the life he lived,” Harmse said.

The award-winning captain dedicated more than 40 years of his life to fighting crime in Nelson Mandela Bay.

He joined the SA Police Reserve Services in Gelvandale at the age of 21, serving the Bay community free of charge. He moved on to co-ordinate the Trio Crimes Unit at the Humewood police station.

In 2016, Rademeyer received a national award for number one police officer in the country at the National Service Excellence Awards.

Rademeyer died years after having survived three heart attacks, a car crash and a freak accident in which he was crushed between a forklift and a warehouse shelf.

“After suffering three heart attacks in one day 23 years ago, my dad refused to go out that way.

“He got up and carried on working for the SAPS at the Humewood police station,” Harmse said.

When he retired in 2017, Rademeyer established the Algoa Security company with Annelize Jerling and Mirko Pineda.

“During the lockdown, he assisted in starting a soup kitchen in Kleinskool, and handed out bread in impoverished communities like Kleinskool and Windvogel,” Harmse said.

Speaking at the captain’s memorial service held at the Boardwalk on Thursday, SAPS air wing constable Bianca Groenewald said: “I can only thank God for allowing [Rademeyer] to be part of this family because I can proudly say that the legacy he left will always remain.

“I am in the air wing today because he pushed me to do what my heart desired.”

Lieutenant-Colonel Bayden Benjamin said Rademeyer had come to mind first whenever he needed help from someone reliable.

“I remember many times the wisdom he imparted upon us as young constables and sergeants and we would wonder how he knew so much but [that’s because] he was a hands-on person who didn’t just read but would also do things [himself],” Benjamin said.

Rademeyer is survived by his wife Noelene and his children Nicky, Rufus, Ridge and Tammy Knight.