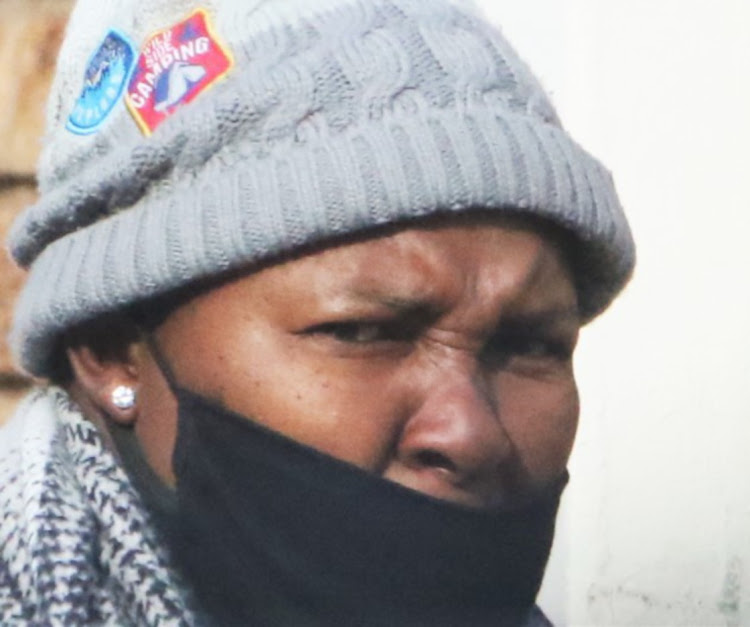 The alleged mastermind of a multimillion-rand stock theft ring, Ntandokazi Xoliswa Mbombo, is taken to a police van after appearing at Qumbu Magistrates Court. She is accused if having stolen 411 cattle worth over R6.2 -million.
Image: LULAMILE FENI

A senior police officer with more than 40 years experience says a woman being accused of masterminding a multimillion-rand stock theft syndicate is a career first for him.

Colonel Sello Rute made the remarks in the Tsolo magistrate's court on Monday where Ntandokazi Xoliswa Mbombo stands accused of stock theft amounting to R6.2m.

I have never heard of it. The case of Ntandokazi is the first of its kind I am dealing with

“I have never heard of it. The case of Ntandokazi is the first of its kind I am dealing with.”

State prosecutor Thango Pangalele said culturally women's only involvement in livestock was through the traditional practice of lobola.

“It is only the time of lobola and weddings that women feature chiefly on issues of cattle because it is for them that the lobola in terms of live cattle is paid for [as] a sign of respect to her family and to create long lasting bonds between the two affected families,” said Pangalele.

Rute said: "Women, mostly widowed or single who are stock owners, tend to be the most vulnerable targets of stock theft.”

He told the court that in addition to the 411 cattle stolen in KwaZulu-Natal and Eastern Cape, there were more new cases. Rute said since the publication of an article in the Daily Dispatch on May 29, more victims had come forward.

All these people sitting in the gallery are her victims, some more of them are outside. Every day we open new cases. She has caused a huge havoc in the district

“All these people sitting in the gallery are her victims, some more of them are outside. Every day we open new cases. She has caused a huge havoc in the district,” said Rute.

Rute told Tsolo magistrate Zukile Mqwishi the two trucks were owned by two different people in Howick in KwaZulu-Natal and each had documents signed by Mbombo showing that each truck had been in the Eastern Cape more than 10 times.

“She is directly linked to the theft of all these cattle. There are many documents, including permits signed by Mbombo and a phone bill or transcripts prove Mbombo had been in contact with the truck owners and her six -co-accused,” said Rute.

Her co-accused are out on R5,000 bail each. Mbombo was released in 2016 on R50,000 bail by Kokstad regional court but allegedly continued stealing cattle.

“She is still to face stock theft charges of 56 cattle worth R264,000 in KwaBhaca feedlot as well as 30 cattle worth R207,000 at Lahlangubo feedlot in Ngcobo. In both those cases there are two fraud cases concerning bank transactions. There are four new cases of 44 cattle in Sulenkama in Qumbu. If she gets bail, we will arrest her for many other cases whose numbers increase daily,'' said Rute.

Her counsel, Melusi Xulu, requested bail and said Mbombo was innocent and would plead not guilty. Pangalele said the state would oppose bail in all the cases.

The case was postponed to Tuesday for a bail decision.