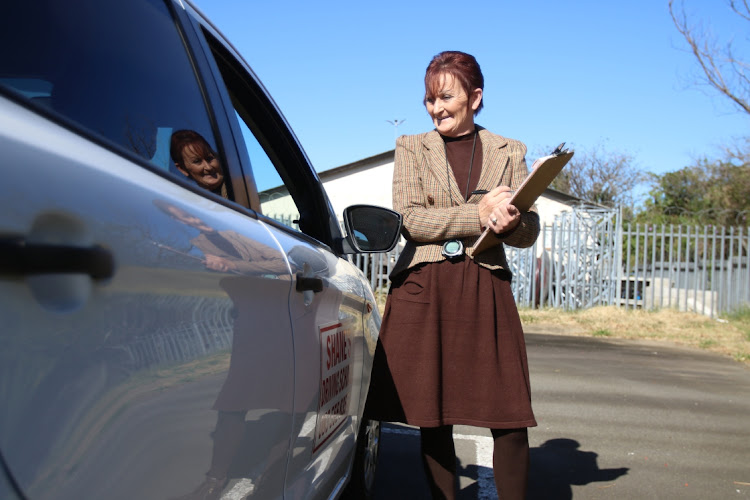 Rosalind Pienaar on her last day after 28 of servive as an examiner at Buffalo city municipality testing station in Gonubie
Image: MICHAEL PINYANA

“I have always loved my work, I’ve enjoyed every minute of it,  but it takes its toll.”

This is what Gonubie traffic department driving test examiner Rosalind Pienaar had to say after 28 years of service spent testing the theoretical knowledge of anxious learners and the practical skills of newbie drivers.

The dedicated examiner enjoyed her last day on the job on Friday.

“It’s all in the family genes,” she quipped.

In 2006, Pienaar transferred to Gonubie, where she became known and loved by many hopeful applicants.

“Many kids and even older applicants are so nervous when taking their driver’s test, but I always try to make them feel at ease. I crack a joke before we start and just do my best to make them feel comfortable,” said Pienaar, who is also fluent in Afrikaans and isiXhosa.

She said to try to make things easier she encouraged applicants to do the test in their home language.

“I grew up in the former Transkei so I understand isiXhosa, and also Afrikaans. When they have to check the vehicle in the yard I always tell applicants they can do it in their language.”

Describing herself as a referee with a pen and not a whistle, Pienaar said though she was strict when it came to marking, it was hard not to see young applicants as her own children.

“I don’t beat around the bush with marks.

“But I get a lump in my throat sometimes when they haven’t made it and they get upset.

“Sometimes I have kids crying in my office before we’ve even started the test. But I give them a hug and just tell them to do the best they can. I have to be like another mom.”

She said while she loved her work, it was time to take a break.

“I’m not yet 60 and I’ve taken early retirement, but it was time.

“Out of all the jobs I had, being a driving test examiner has been the most challenging but also the most wonderful. I got to meet so many new people.

“Over the years I was only in one minor accident where I had a bit of whiplash, but being a driving examiner can be quite hair-raising,” she said.

“You always have to be alert and are under a lot of pressure. It’s quite stressful and really takes its toll on your body too.”