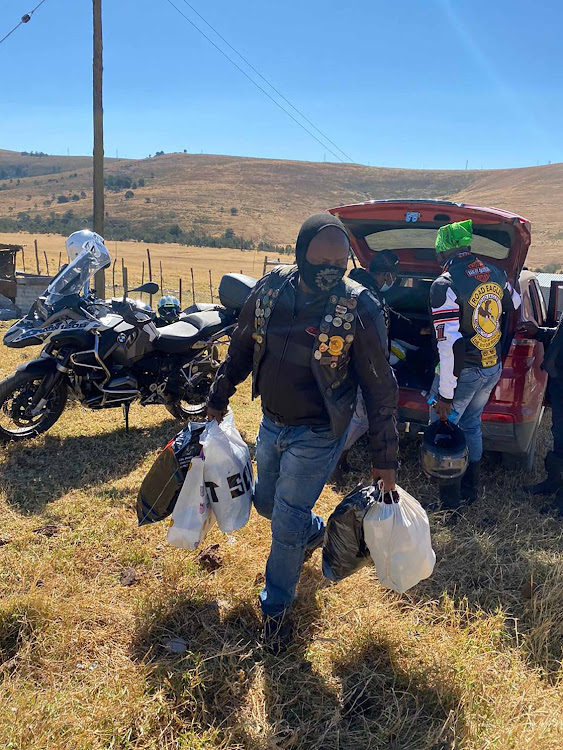 The Road Eagles Motorcyle Association marked Women's Month by donating food and toiletries to a gender-based violence victim, a teenager in Stutterheim, at the weekend.
Image: SUPPLIED

A 16-year-old alleged rape survivor was happy to receive groceries, toiletries and electricity from bikers at her Ngqanda village home at the weekend.

The Road Eagles Motorcycle Association marked Women’s Month by visiting the village near Stutterheim to donate much-needed supplies to the teen, who may not be named.

The rape case is being heard in court.

“We visited a family who was affected by gender-based violence, with a victim being a young girl,” Road Eagles Motorcycle Association president Lisa Quluba said.

“Among the goods delivered were groceries, toiletries and electricity. The most important gift they brought to the family were words of support and comfort.”

“In commemoration of Women’s Month, and to show we are taking a stand against gender-based violence, on Saturday [we] did a regional charity run to Ngqanda village in Stutterheim,” he said.

“The elderly lady of the household was speechless over what these men and women with iron horses did for them without even knowing them.

“The Road Eagles Motorcycle Association is one of the oldest motorcycle clubs in the Eastern Cape and has been involved in charity work throughout its existence.

“We do these charity runs out of our own funds, and at times we are assisted by friends and family.”

Eastern Cape ANCWL spokesperson Nomakosazana Nongqayi said: “The Women's League was honoured by this kind of contribution during this month, when the heroines of the struggle are commemorated. We believe that together we can fight the scourge of gender-based violence.”