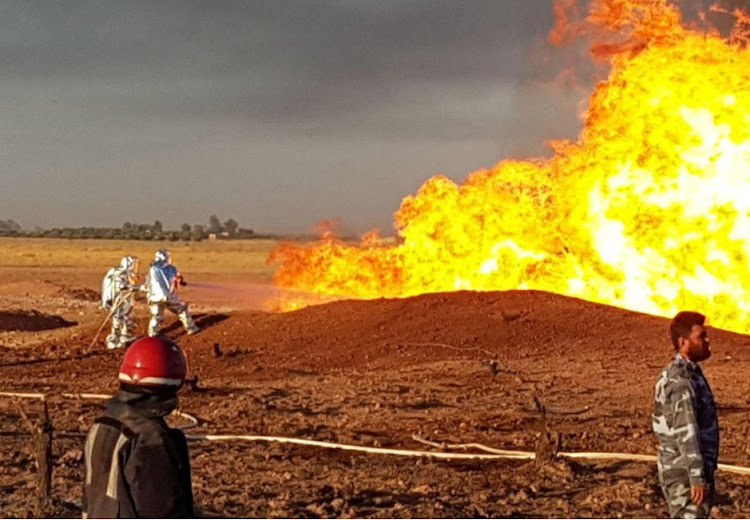 Firefighters spray water on the fire that resulted from an explosion on the Arab Gas Pipeline between the towns of Ad Dumayr and Adra, northwest of the capital of Damascus, on August 24, 2020.
Image: REUTERS/ SANA

An explosion on the Arab Gas Pipeline that caused a power blackout in Syria on Monday was the result of a “terrorist” attack, state media cited the energy minister as saying.

Ikhbariya TV channel showed footage of a large fire after the explosion, which officials said occurred between the towns of Ad Dumayr and Adra, northwest of the capital of Damascus.

Huge gas-fuelled “floating power” barges could become a standard feature off the coast of Port Elizabeth as the government pushes forward in a bid to ...
News
1 year ago

The channel later said the fire had been extinguished.

“Assessments show that the explosion ... was the result of a terrorist attack,” state news agency SANA quoted minister of petroleum and mineral resources Ali Ghanem as saying.

He did not provide further detail.

The electricity minister earlier said that power was gradually being restored to the country’s provinces.

A resident in Damascus said power had returned in the capital.

In 2013, much of Syria was hit by a power cut after rebel shelling hit a gas pipeline during the country’s civil war.

The Arab Gas Pipeline system extends from Egypt into Jordan and Syria. — Reuters