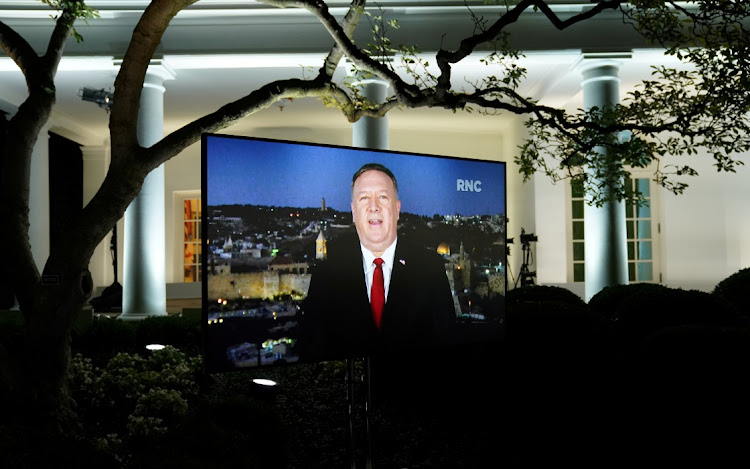 US secretary of state Mike Pompeo gives his live address to the 2020 Republican National Convention from Israel on a monitor set up in the Rose Garden of the White House in Washington
Image: REUTERS/ TPX IMAGES/ KEVIN LAMARQUE

US secretary of state Mike Pompeo praised President Donald Trump's foreign policy record in a Republican National Convention speech on Tuesday that Democrats criticised as a breach of protocol and perhaps the law.

Speaking in a recorded video from a Jerusalem rooftop during an official trip, Pompeo, a Trump appointee widely believed to harbour presidential aspirations, said the president had exposed the “predatory aggression” of the Chinese Communist Party, while defeating Islamic State militants and lowering the threat from North Korea.

US Secretary of State Pompeo to visit Sudan in coming days

US Secretary of State Mike Pompeo is to visit Sudan in the coming days, a Sudanese government official said on Sunday
Africa
8 months ago

Even before he spoke, critics pounced, saying Pompeo had broken with decades of protocol in using his appointed office for partisan purposes.

The chairman of a Democratic-led US House of Representatives subcommittee announced on Tuesday an investigation into whether Pompeo's appearance broke federal law and regulations.

“The Trump administration and secretary Pompeo have shown a gross disregard not only of basic ethics, but also a blatant willingness to violate federal law for political gain,” Joaquin Castro, head of the House foreign affairs committee's oversight subcommittee, said in a statement.

In a letter to deputy secretary of state Stephen Biegun, Castro said Pompeo's appearance was “highly unusual and likely unprecedented”, and “may also be illegal”.

US Secretary of State Mike Pompeo discussed ways to tackle the growing might of China when he met Britain's Prime Minister Boris Johnson on Tuesday, ...
News
9 months ago

A state department official told a pool reporter travelling with Pompeo that the secretary was appearing in his personal capacity and no state department personnel or resources were involved.

John Bellinger, the top state department lawyer under former Republican secretary of state Condoleezza Rice, said the agency had long barred senior political appointees from partisan activity, including attending party conventions, even if they might be permitted under the 1939 Hatch Act limiting the political activities of federal employees.

Pompeo's address also appeared to violate his own instructions restating the department's prohibition on political activities — which applies to official and private time — sent to personnel in a July 24 cable.

The primary constitutional function of the national government is ensuring that your family — and mine — are safe and enjoy the freedom to live, to work, to learn and to worship as they choose

In his letter to Biegun, Castro wrote that it was “readily apparent” from documents in his panel's possession that Pompeo's appearance may violate the Hatch Act, federal regulations implementing that law and federal rules.

He asked that Biegun answer a series of questions by no later than September 1 and arrange a briefing for lawmakers by the same date.

In his remarks to the Republican convention, Pompeo described what he called Trump's foreign policy successes, including the president's decision to move the US Embassy in Israel to Jerusalem and holding talks with North Korean leadership.

“The primary constitutional function of the national government is ensuring that your family — and mine — are safe and enjoy the freedom to live, to work, to learn and to worship as they choose,” Pompeo said. — Reuters