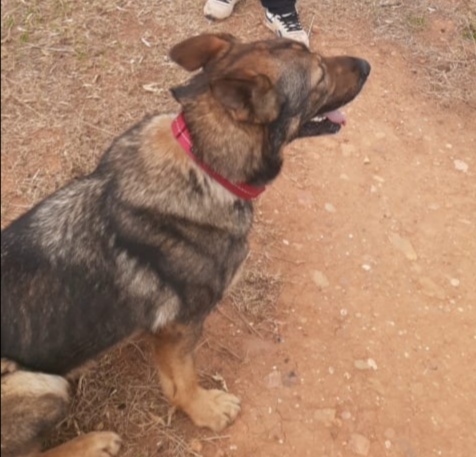 Police search-and-rescue dog Misty found a missing toddler unharmed with her father on Wednesday morning in an orange orchard in Patensie.
Image: SUPPLIED

A toddler who went missing in Patensie on Tuesday afternoon has been found unharmed.

Police spokesperson Colonel Priscilla Naidu said the 17-month-old girl was found with her father in an orange orchard on Wednesday morning.

Naidu said the toddler was reported missing on Tuesday night.

Her father, 24, allegedly snatched his daughter and fled their home after arguing with the child’s mother.

“The mother was not overly concerned at the time as she assumed that he would return with the child as soon as his anger subdued.

“However, when he did not return by 9pm she reported the matter to police,” Naidu said.

The investigating officer, Detective Sergeant Phumlani Ngqengqa, immediately mobilised a team and searched nearby orange groves all night but did not find the child.

At about 7.30am on Wednesday, a search-and-rescue team from Port Elizabeth was roped in to assist in the search.

Search teams were split up and at about 10.30am police search-and-rescue dog Misty picked up a scent and found the father and child huddled among the low-hanging trees, Naidu said.

It was not known where they had spent the night.

The toddler was taken to hospital for a medical check-up and the father arrested.

“He was not detained. However, a statement was taken from him and on conclusion of the investigation the case will be sent to the court for a decision,” Naidu said.

The acting police district commissioner for the Sarah Baartman District, Brigadier John Lebok, commended the search teams for their efforts.

“Credit most definitely must be given to our police dog, Misty, who played a major role in the search, and it is through her trained skills that we were able to find the child and the father.

“The wellbeing and welfare of children remain a priority for SAPS and when a child is reported missing or kidnapped, available resources and manpower must immediately be mobilised  to find the child as soon as possible,” Lebok said.