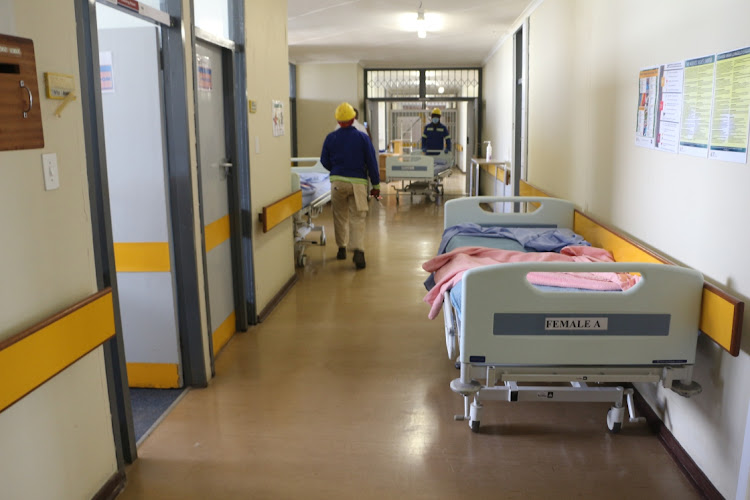 A nursing union alleges the Eastern Cape health department wants to scapegoat a nurse for the death of Nomathamsanqa Banzi at SS Gida Hospital.
Image: SUPPLIED

A nursing union alleges the Eastern Cape health department wants to turn a nurse into a scapegoat for the death of Nomathamsanqa Banzi, who died of Covid-19 complications, allegedly in a linen room, in SS Gida provincial hospital four months ago.

Department spokesperson Siyanda Manana maintains “all staff” are being investigated for the circumstances surrounding the death.

The Dispatch understands that nurse, Nalukhanyo Mnisi, was called in for a “consultation” over Banzi's  death on May 4, and that the department had sent an allegation to his union, the Democratic Nursing Organisation of SA, that Mnisi had “neglected” Banzi on the night of her death.

Nurses at the hospital told the Dispatch that at the time of Banzi's death none of them had the personal protective equipment [PPE] they needed and that the first port of call in handling a Covid-19 patient  — when health staff had no training and little knowledge about the virus — would have been a doctor.

Furthermore, the nurses claim, they have been slapped with letters threatening to dock their salaries for April protests if they continue to complain about PPE that has to be washed and used again.

Hold accountable all those who neglect patients

Access to quality healthcare continues to elude many citizens, particularly in a province like the Eastern Cape, which is plagued by infrastructure ...
News
2 years ago

The Dispatch has seen a copy of the letter, written on July 17 and addressed to the hospital's nurses, informing them their August salaries would be docked.

Responding to this, Manana said: “The department implements a no-work, no-pay policy if no work was done.”

Approached for comment, Mnisi referred queries to the department and his union.

Denosa provincial secretary Khaya Sodidi said the department was focusing only on Mnisi.

“What we can say is yes, the department is shifting blame for what happened. There is that intention of shifting the blame to the nurses, but actually what happened there was that there was a lack of PPE.”

Sodidi said Kwankwa wrote a scathing letter on May 6 to premier Oscar Mabuyane alleging negligence surrounding the death of his aunt and lack of PPE at the hospital.

Paediatrician and anaesthetist charged with child’s death set for court

Two prominent doctors who are being blamed for the death of their 10-year-old patient following medical surgery are expected to appear in the ...
News
1 year ago

At the time, Mabuyane ordered the health ombudsman to investigate the circumstances surrounding Banzi's death. The ombud could not be reached for an update on Thursday.

EFF MP Naledi Chirwa asked health minister Zweli Mkhize on August 28 what steps had been taken to respond to a letter written by an SS Gida nurse who raised the lack of PPE and in-hospital infections of patients.

Responding to Chirwa this week, Mkhize attributed the shortage of PPE at the hospital to “inappropriate use”.

Kwankwa was not available for an interview at the time of writing. - DispatchLIVE