Clicks shutdown: SA weighs in on closing of retailer's stores 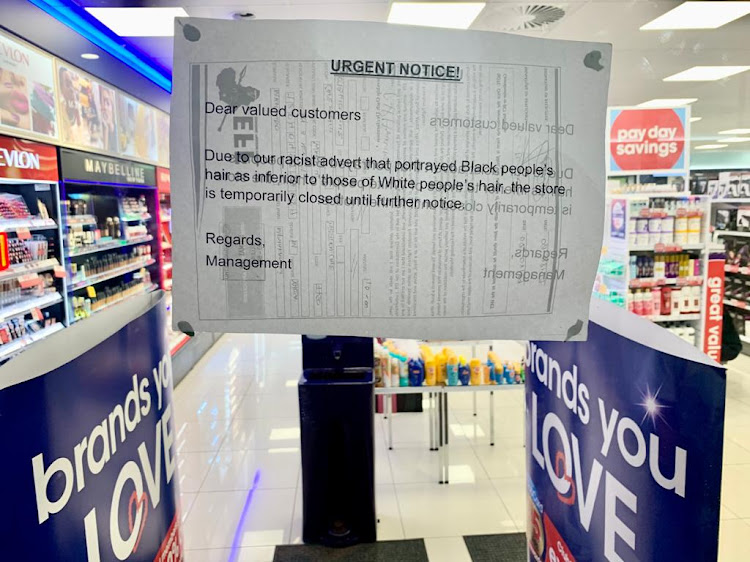 A sign attached to the Clicks at Goodwood Mall in Cape Town.
Image: Esa Alexander/Sunday Times

The national shutdown of retailer Clicks by EFF members has been met with mixed reactions.

On Monday, the red berets embarked on a national shutdown of many Clicks stores, led by party leaders Julius Malema and Floyd Shivambu, after the offensive advert loaded on Clicks' website.

The retailer at the weekend sparked outrage after posting images which most viewed as discrimination against natural black hair.

The advert labelled photographs of African hair as “dry” and “damaged”, while examples of “fine” and “flat” hair were illustrated with photographs of blonde hair.

Many expressed their outrage on social media, calling the advert offensive and racist. The retailer later issued an apology and removed the ad.

“We have made a mistake and sincerely apologise for letting you down. We recognise we have a role to play in creating a more diverse and inclusive SA, starting with our website content. We know we need to do better, and commit to ensuring our content better reflects this value,” said Clicks.

The company said the advert was not its own and that it was commissioned by the hair company TRESemmé, which issued an apology on its website, saying the advert was meant to celebrate all hair types.

“We are very sorry that images used in a TRESemmé SA marketing campaign on the Clicks website promote racist stereotypes about hair.

“The campaign set out to celebrate the beauty of all hair types and the range of solutions that TRESemmé offers, but we got it wrong. The images are not in line with the values of our brand, or of Clicks.

“TRESemmé SA apologises for the offence these images have caused. We also apologise to the Clicks group. We are looking into how this happened and why it wasn’t picked up, and we will take all the necessary steps to make sure it doesn’t happen again.”

The EFF issued a strongly-worded two sentence statement in reply to a four-page letter from lawyers for the retail outlet Clicks, in which they ...
News
1 year ago

The EFF said the apology was not enough and mobilised its members to forcibly shut down all Clicks stores.

The party shared that it had received a letter from Clicks' lawyers before the shutdown.

“You racist lawyers of Pravin Jammanda Gordhan, and your racist client Clicks can go to their nearest hell,” read the EFF's response to the letter.

Werksmans Attorneys, which represent Clicks in the matter, has previously represented public enterprises minister Gordhan in his legal battles.

The Clicks at Saveways Centre in Emalahleni in Witbank was damaged in a suspected petrol-bombing. A police source told TimesLIVE that there was minimal damage, with just a trolley catching fire.

The store said it would temporarily close until further notice.

Members of the EFF block the entrance of Clicks in Goodwood Mall, Cape Town after after 'racist' advert @TimesLIVE @Clicks_SA @EFFSouthAfrica @EFF pic.twitter.com/E6Dbci5iKm

The situations at Clicks at Highveld Mall in Witbank. Shops have closed their doors as the EFF crowd has descended onto the mall. @TimesLIVE #ShutdownClicks pic.twitter.com/vYxDLbCsKn

Police are now standing guard at the Clicks at Benfleur in Witbank as EFF protestirs had earlier banged on the glass door calling for those working inside to come out. Police and the EFFs Collen Sedibe are now inside the shop, addressing Clicks management. @TimesLIVE pic.twitter.com/jvB6MNSp1b

#Clicks @Julius_S_Malema and the @EFFSouthAfrica are on the ground at the Mall of the North. pic.twitter.com/cJr16Sn2we

On social media, many, including One SA leader Mmusi Maimane and former public protector Thuli Madonsela, weighed in on the shutdown.

It’s clear that #Clicks needs to do more than merely tweet an apology, however an in store protest maybe overly harsh. Starbucks did a lot of work organizationally after a racist incident at their stores in 2018. We need to move away from a politics of conflict and extremes. pic.twitter.com/Zhm8lNWmYm

We cannot handle our difficult conversations in the same way for 26 years. This #Clicks saga is an example of how yet again we are not engaging with empathy, with compassion and with a view to building unity.

In my view, the #Clicks case #BlackHairMatter,is a textbook case of unconscious bias. Calling it out is great but anarchy and violence undermine the cause. The best and most cerebral response I’ve seen so far is a video by young black women, among them my colleague @Diane_Gahiza

Protest is the language of the unheard and violence,the language of the disempowered. Is our constitutional democracy working?Are our parliamentary representatives empowered to use democratic institutions to make a difference?That will be my next article? #Clicks #BlackHairMatter

I have a question to ask what happens to those who get their medicine at? #Clicks

Has #Clicks saga shocked @CyrilRamaphosa yet? Or it'll be on this week's episode of his Twitter meltdown, like the one he had last Friday?

Sorry guys, unable to stock up any beauty products today. #clicks has been taken over by #JuliusMalema ATTACK brigade with #clicksmustfall

I don't condone violence in any form but may this be a lesson for Clicks & their bias. Ive experienced it first hand as a brown blogger pic.twitter.com/sYcA4EK4yC

#Clicks doesn't only sell hair, it also sells medication, chronic medication .
There are people who fetch medication for hypertension and diabetes.
Vandalizing #Clicks by #EFF might have cost a life of someone.
Chronic meds cannot be just fetched anywhere.

Certain things are really unnecessary this issue could have been dealt with in a more civil manner.Imagine with so many jobs lost during lockdown. Mr Malema still wants to add on that by promoting such behaviour.We far much better this. By the way H&M is still operating #Clicks

Dankie EFF for the fight💪🏾💪🏾 I don’t care whether the EFF is doing it for votes or for being relevant... Don’t let other races make ur feel unworthy... I know I like wigs 🤷🏽‍♀️Mara oksalayo what clicks done is not cool...and many others!!!
#Clicks

I very much believe that #Clicks did what they did on purpose. Cause no publicity is bad publicity. I'm glad @EFFSouthAfrica is here to to discipline them😂#clicksmustfall