Second devastating fire reported at SANParks in a week 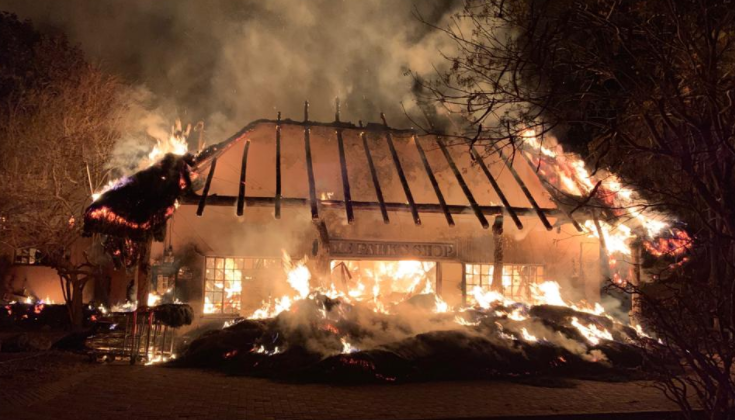 The fire that gutted a building at the Letaba rest camp last week.
Image: TWITTER/ @SANParksKNP

SANParks has reported a second fire on one of its premises within days.

On Monday, a blaze broke out at the Berg en Dal restaurant which is situated at a rest camp in the Kruger National Park.

Taking to its Twitter page, SANParks shared images of the thatched roof of the restaurant in flames.

Please note: Berg en Dal restaurant is currently on fire. We will issue an official statement shortly, once the fire is put out. Please keep away from the area in order for disaster teams to be free to move and work. Please no speculations. pic.twitter.com/v1pw4JX0XO

Rest camp staff, contractors and other park visitors assisted in dousing the flames.

The park said the cause of the blaze was not immediately clear and said investigations were under way.

Six days earlier a fire gutted the shop storeroom of the Letaba rest camp which is in the north central region of the Kruger.

“[The fire] completely gutted the shop as well as the staff television room,” said park officials in a statement.

The blaze had reportedly broken out on Tuesday evening.

This morning guests and staff are waking up to a horrible sight of the burnt TV room and Shop at Letaba camp. The fire was finally brought under control this morning without any casualties. Well done to all involved. Investigations into the cause of the fire have commenced. pic.twitter.com/QYhOyLtJpN

“Staff members at Letaba and Olifants as well as the fire and rescue team from Phalaborwa managed to contain the fire before it could spread to other structures linked to the shop building, but the shop and staff television room could not be saved,” SANParks said.

The cause of that fire was also unclear.

No one was injured in either of the blazes.