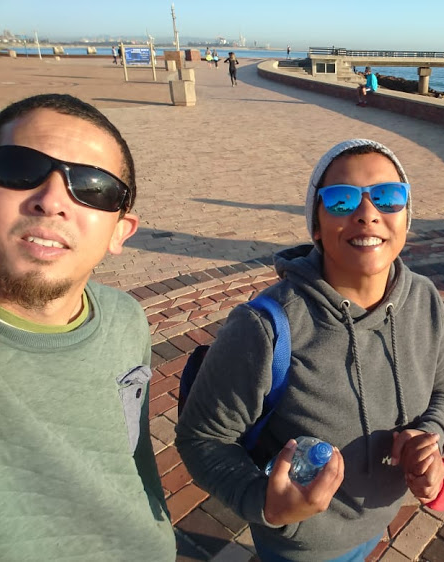 Zayd and Shakira Hendricks say they have learnt many lessons from their autistic son Yahya.
Image: SUPPLIED

Everyone wants the genius child, Shakira Hendricks, 39, whose autistic son falls on the low-functioning side of the spectrum, says.

But the Hollywood version of autism is far from reality — especially in Port Elizabeth where public schools for children like her son Yahya, 9, are few and far between.

For the Hendricks family, the reality was a lack of sleep, plates being thrown and sticking to a strict diet.

Shakira said when her son was battling to talk at the age of two many people had shrugged it off, saying he was a boy and boys traditionally developed at a slower rate than girls.

My son was diagnosed with low-functioning autism, being non-verbal, with a global delay of two years. As a toddler, he wasn’t clingy like other children. He was independent, he’d push a chair, climb into bed and sleep

But, by the time he was three they knew they needed to see a doctor.

“My son was diagnosed with low-functioning autism, being non-verbal, with a global delay of two years,” she said.

“As a toddler, he wasn’t clingy like other children. He was independent, he’d push a chair, climb into bed and sleep.

“For four years we took him to a speech therapist, he went for occupational therapy and there wasn’t real improvement towards him being able to talk.”

She said where family and friends did not fully understand, the couple relied on each other as a source of strength.

“In the movies, they show people with autism as geniuses.

“Everyone wants the genius but we’re on the other side of the spectrum, the low side.

“We as parents had to accept our child could not go into mainstream schooling.

“Between [ages] four and eight were the most difficult years. He’d wake up at about midnight and sleep [again] around 4am.

“He started self-harming, he’d bite, scratch his arm, pinch himself in his armpits.

If I left the room ... he’d knock my plate of food off [the table] due to the medication and we’d take a drive with him, which was when I’d eat

“If I left the room ... he’d knock my plate of food off [the table] due to the medication and we’d take a drive with him, which was when I’d eat.”

She said they had learnt how he felt through the different sounds he makes or even through the way he walked. t

“We all understood as a family that the sensory system for an autistic child is amplified and more sensitive.

“When we stopped the medication our happy baby came back.

She said despite it all, her little boy had taught her family that they could choose to be happy or to be angry and many lessons had been learnt.

“What hurts me is that there aren’t enough schools for autistic children.

“How can an autistic child survive in informal settlements, with noise, too many people, too many smells?

“I want to create autism awareness in my community in North End because people said we were looking for attention when we’d go to the doctor,” Shakira said.

Victory Kids Early Intervention centre head Gloria du Toit said that at the age of two,  if a child couldn’t say a few words, had speech delays, avoided eye contact and was sensitive to loud noise these could be considered markers for autism.

She agreed that there were not enough schools for children with autism in Nelson Mandela Bay.

“We had to relocate to a new building to accommodate the huge numbers but what about the children who can’t afford it?

Boy who was bullied due to autism wins Teen SA title

Etienne, who suffers from mild autism, this month won the title of Mr Petite Teen SA at the 2020 Miss & Mr Junior Pageant South Africa, with ...
News
6 months ago

“There needs to be more awareness in general.

“I won’t say it is a disability, it’s a difference ability, because autism is misunderstood.

“People say they [autistic children] need to be disciplined but they need to be dealt with differently.

“The Missionvale Clinic is doing a magnificent job through intervention and assessment.

“I was the principal at Quest School for learners with autism, which is a government school.

“There are long queues of pupils who want to study there last time I checked.

“It is well run but its capacity is limited.

“They can only have six or seven pupils because they are all taught differently so you can’t have 27 pupils.

“We need more schools like that, we need care, service and education,“Jorritsma said.