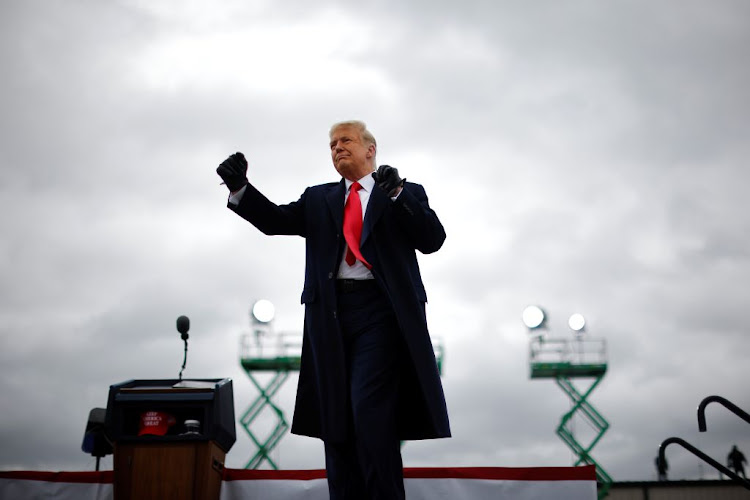 With the coronavirus roaring back across the US, President Donald Trump is spending the closing days of his re-election campaign criticising public officials and medical professionals who are trying to beat it back.

Campaigning across the Midwest on Friday, Trump delivered a closing message that promised an economic revival and a vaccine to combat a pandemic that is pushing hospitals to capacity and killing up to 1,000 Americans each day.

But that slice of optimism was delivered with great heapings of grievance — directed at Democratic rival Joe Biden and plenty of other people who aren't on Tuesday's ballot.

Trump falsely said doctors earn more money when their patients die of the disease, building on his past criticism of medical experts like Dr. Anthony Fauci, his top infectious-disease expert.

He told reporters he was not concerned that supporters who flock to his events might contract the virus, even though he, his family and many White House staffers have battled the disease in recent weeks.

President Donald Trump and Democratic rival Joe Biden will rally supporters on Thursday in the battleground of Florida, visiting the same city hours ...
Politics
1 year ago

The president criticised Democratic officials in Minnesota for enforcing social-distancing rules that limited his rally to 250 people. “It's a small thing, but a horrible thing,” he said.

Trump warned voters that Biden would prohibit Americans from celebrating Thanksgiving and Christmas holidays and other special events if he wins office.

Polls show Trump, 74, trailing Biden, 77, both nationally and in the swing states that will decide the outcome of Tuesday's election. Voters say the coronavirus is their top concern.

Biden, for his part, has accused Trump of giving up in the fight against the disease, which has killed almost 229,000 Americans and infected nearly 3% of the population.

His campaign has sharply limited crowd sizes at events or restricted supporters to their automobiles. Speaking in Milwaukee on Friday, he delivered his remarks while wearing a medical mask, which frequently slipped off his nose.

A Joe Biden US presidency would lower border tensions and raise pressure on Mexico to respect US business interests as the two neighbours implement a ...
Politics
1 year ago

“The only thing that can tear America apart is America itself, and that's exactly what Donald Trump has been doing,” he said.

Trump on Saturday will travel to Pennsylvania, which as yet has not seen the dramatic coronavirus spikes that are threatening hospital capacity in Wisconsin and other battleground states. Still, nearly 8,700 people in the state have died of the disease this year.

Biden will campaign in Michigan, joined by former President Barack Obama, for whom he served as vice-president.

With a polarising president on the ballot and a deadly pandemic casting the role of government into high relief, analysts expect a record number of voters to participate in the election.

At least 86 million Americans have already cast ballots in person or through the mail, according to the University of Florida's Elections Project, or 63% of the total 2016 turnout.

Trump has repeatedly claimed without evidence that mail-in ballots are susceptible to fraud and has more recently argued that only the results available on election night should count. In a flurry of legal motions, his campaign has sought to restrict absentee balloting across the country.

Early voting data show that far more Democrats have voted by mail, while Republicans are expected to turn out in greater numbers on Tuesday.

Officials in several states, including Pennsylvania and Wisconsin, warn it could take several days to count all of those mail ballots, leading to the prospect of days of uncertainty if the outcome hinges on those states.

Security officials are preparing for a range of possible threats, from spontaneous acts of violence to more organised, planned attacks. In downtown Washington, workers on Friday boarded up storefronts near the White House to protect against possible damage.