Ramaphosa looks forward to deeper ties with US 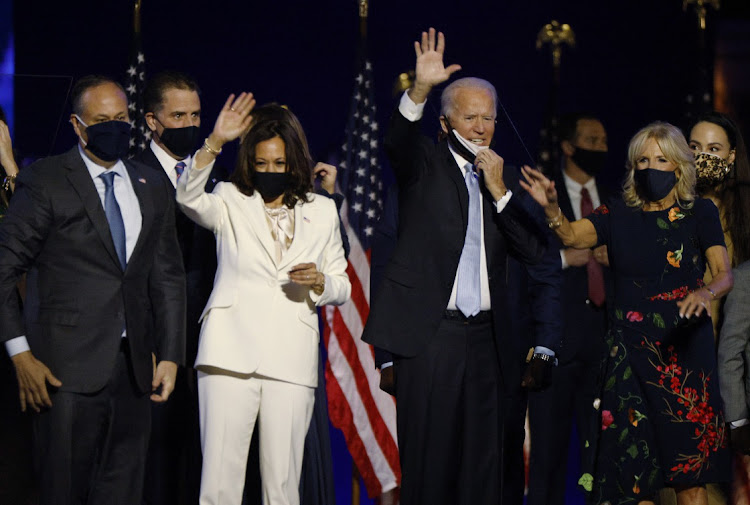 US president Joe Biden and his wife Jill, and vice president-elect Kamala Harris and her husband Doug, celebrate at their election rally in Wilmington, Delaware, US
Image: JIM BOURG

Biden, 77, trumped Republican Donald Trump to win the tightly contested US elections and become the 46th US president as he amassed more than the required 270 electoral votes on Saturday.

The election has been met with renewed hope among world leaders that he can adopt policies that will restore cooperative links with the continent and the rest of the world.

Ramaphosa took to Twitter at the weekend to congratulate Biden and running mate Kamala Harris for their electoral victory.

“We congratulate president-elect @JoeBiden and vice-president @KamalaHarris and the American people on your election. We look forward to working with you and deepening our bonds of friendship and cooperation,” tweeted Ramaphosa.

Biden calls for healing in appeal to Trump voters

President-elect Joe Biden declared it was "time to heal" a deeply divided America in his first speech after winning in a bitter election, even as ...
News
10 months ago

The US and Zimbabwe have had thorny relations since the days of former president Robert Mugabe and his then US counterpart George Bush.

“On behalf of all Zimbabweans, a huge congratulations to president-elect @Joe Biden on his elections victory,” tweeted Mnangagwa.

“Zimbabwe wishes you every successes in leading the American people. I look forward to working with you to increase cooperation between our two nations.”

Buhari said Biden had a remarkable track record, which gave him hope that he will add value to world affairs.

“I urge Mr Biden to deploy his vast experience in tracking the negative consequences of nationalist politics on world affairs – which have created divisions and uncertainties – and to introduce greater engagement with Africa on the basis of reciprocal respect and shared interests,” tweeted Buhari.

A video clip of young Biden lambasting the South African apartheid government during the 1980s also started doing rounds on social media after his election.