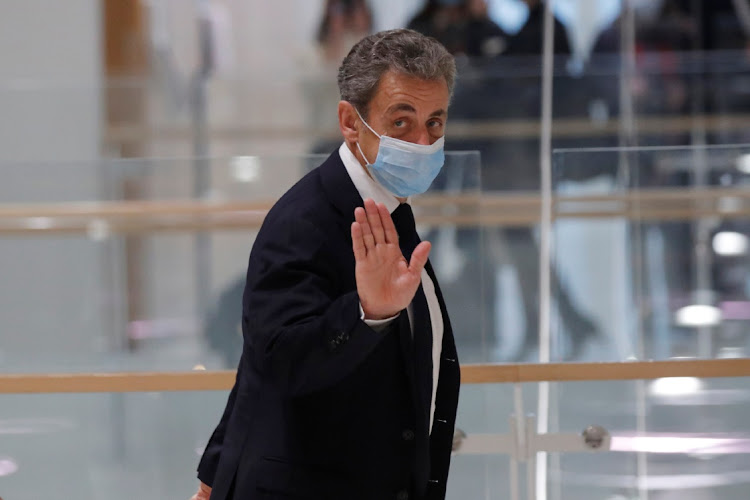 Former French president Nicolas Sarkozy leaves after an interruption in his trial on charges of corruption and influence peddling, at a Paris court in France, on November 23 2020.
Image: REUTERS/ CHARLES PLATIAU

Former French president Nicolas Sarkozy briefly appeared in court on Monday to face trial on corruption accusations before judges suspended the hearings until November 26 to assess the health of one of his co-defendants.

Prosecutors allege Sarkozy offered to secure a plum job in Monaco for judge Gilbert Azibert in return for confidential information about an inquiry into allegations that Sarkozy had accepted illegal payments from the late L'Oreal heiress Liliane Bettencourt for his 2007 presidential campaign.

Sarkozy, who led France from 2007-2012 and has remained influential among conservatives, has denied any wrongdoing in all the investigations against him. He and his centre-right party Les Republicains say they are politically motivated.

French Interior Minister Gerald Darmanin said he was launching a probe into clashes that broke out late on Monday after police cleared out a new ...
News
1 year ago

Arriving through a back entrance wearing a dark suit and mask, Sarkozy confirmed his name and occupation as former president and lawyer.

The judges then considered a request by Azibert's lawyer to suspend the trial because his client, who was not in court, was at high risk of contracting Covid-19 given a long-term heart condition.

The judges ordered an independent medical assessment by Thursday before deciding whether to go ahead with the trial by videoconference or to postpone it until after the pandemic.

Investigators had from 2013 been wiretapping conversations between Sarkozy and his lawyer Thierry Herzog as they delved into allegations of Libyan financing in Sarkozy's 2007 campaign.

France's health minister Olivier Veran said on Tuesday the country was regaining control over the coronavirus but was not ready to ease the second ...
News
1 year ago

Prosecutors have said wiretaps showed that Sarkozy and Herzog had on multiple occasions discussed contacting Azibert, a magistrate at the Cour de Cassation, France's top appeals court for criminal cases, and well-informed on the Bettencourt inquiry.

They allege that Sarkozy offered to help Azibert get the Monaco job in return for insider help. Sarkozy told BFM TV in November Azibert never got the job.

Herzog and Azibert are both on trial with Sarkozy, charged with corruption and influence-peddling. They are also accused of “violating professional secrecy”. They deny any wrongdoing.

All three face up to 10 years in prison and hefty fines if convicted.

Next March, Sarkozy is due in court on accusations of violating campaign financing rules during his failed 2012 re-election bid. The so-called Bygmalion case centres on accusations that Sarkozy's party worked with a friendly public relations firm to hide the true cost of his campaign.

The French government will reimpose an evening curfew on Paris, and possibly the Ile-de-France region around the capital, to tackle worsening ...
News
1 year ago