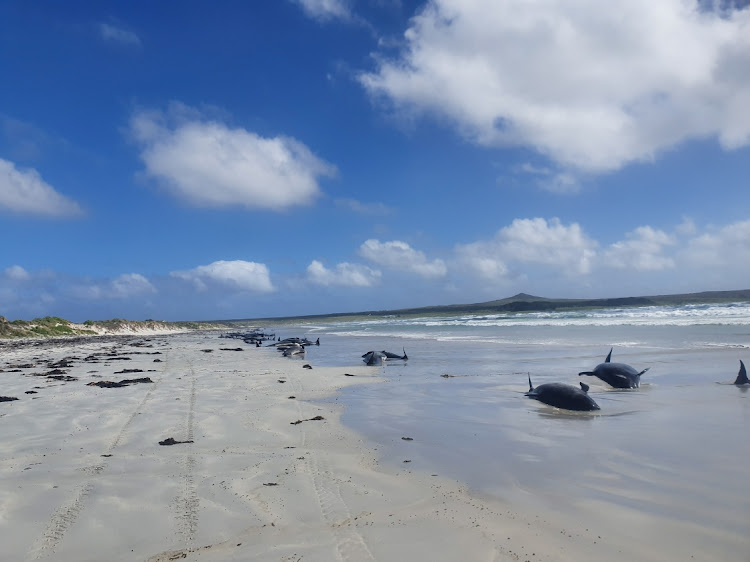 Pilot whales are seen stranded on the beach in Chatham Islands, New Zealand November 22, 2020 in this picture obtained from social media.
Image: JEMMA WELCH/DEPARTMENT OF CONSERVATION NZ via REUTERS

About 100 pilot whales and bottlenose dolphins have died in a mass stranding on the remote Chatham Islands, about 800 km (497 miles) off New Zealand's east coast, officials said on Wednesday.

Most of them were stranded during the weekend but rescue efforts have been hampered by the remote location of the island.

New Zealand's Department of Conservation (DOC) said in total 97 pilot whales and three dolphins died in the stranding, adding that they were notified of the incident on Sunday.

"Only 26 of the whales were still alive at this point, the majority of them appearing very weak, and were euthanised due to the rough sea conditions and almost certainty of there being great white sharks in the water which are brought in by a stranding like this,” said DOC Biodiversity Ranger Jemma Welch.

According to a marine mammals expert, one of the rarest sights to pass through Algoa Bay — two pods of killer whales spotted over two consecutive ...
News
7 months ago

Mass strandings are reasonably common on the Chatham Islands with up to 1,000 animals dying in a single stranding in 1918.

Mass whale strandings have occurred throughout recorded modern history, and why it happens is a question that has puzzled marine biologists for years.

In late September, several hundred whales died in shallow waters off the Australian coast in one of the world's biggest mass whale strandings.