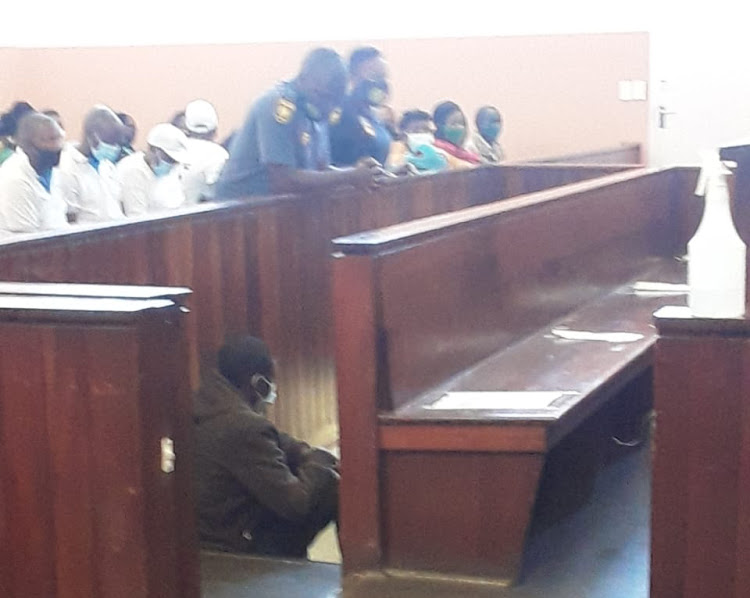 Nowa Makula, 32, sits on the stairs to the holding cells during his first court appearance for the murder of six Eastern Cape family members, including three of his own children.
Image: SIKHO NTSHOBANE

Nowa Makula, 32, the man accused of hacking an Elliotdale family of six to death last week, will make a formal bail application on December 7. 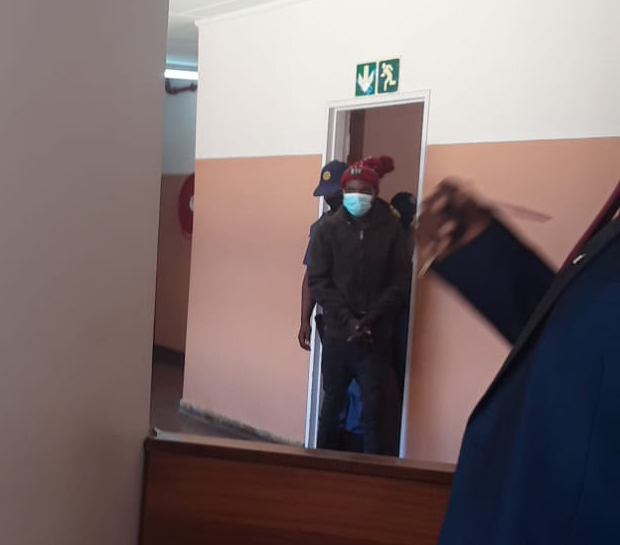 Nowa Makula, 32, is taken to his first court appearance for the murder of six Eastern Cape family members, including three of his own children.
Image: SIKHO NTSHOBANE

Makula, was the boyfriend of the mother and father of three of the children who were hacked to death with an axe, including a six-month-old baby.

The horrific scene was discovered by the mother's 16-year-old son. The killings have made headlines in South Africa and internationally and came as the country started it's 16 Days of Activism against Gender-based Violence campaign.

He made his first court appearance in the Elliotdale magistrate's court on Monday before the matter was postponed for the bail application.

A large crowd, of mostly women, gathered outside the Elliotdale magistrate's court where a 32-year-old man accused of hacking to death six family ...
News
4 months ago

'Just stop it': Cele's plea to men after axe-killing of EC mom and five children

"I am making a call to men, I urge you all to stop brutalising and violating women and children … it’s that simple.”
News
4 months ago

Police minister Bheki Cele has praised Eastern Cape police for their swift action in arresting a man suspected of killing a mother and five ...
News
4 months ago

AXE MASSACRE: 'Kids bodies were piled on top of each other'

The bodies of four of the five children hacked to death in Elliotdale this week were piled on top of each other before the killer left the scene. ...
News
4 months ago

Police have arrested a suspect - preparing to flee the country - within 24 hours of the discovery of the brutal murder of a woman and her five ...
News
4 months ago

Scattered on the floor of the shack where six members of the same family were hacked to death were photographs of all those who died. Someone had ...
News
4 months ago

A man has been arrested in connection with the brutal slaying of six family members in the Elliotdale area earlier this week. The arrest of the man ...
News
4 months ago

The 16-year-old first-born son of the woman slain along with her other children in Kwaaiman near Ellitodale and Coffee Bay on Tuesday night was the ...
News
4 months ago

‘Gruesome and heartless murders’: Search for husband after wife and five children ‘axed to death’

Six people, including a six-month-old baby, were brutally murdered at home in the Eastern Cape on the eve of the 16 Days of Activism for No Violence ...
News
4 months ago

A mother and her five children, including an infant, were found killed at home in their rural Eastern Cape home on Tuesday night. Police says that ...
News
4 months ago
Next Article