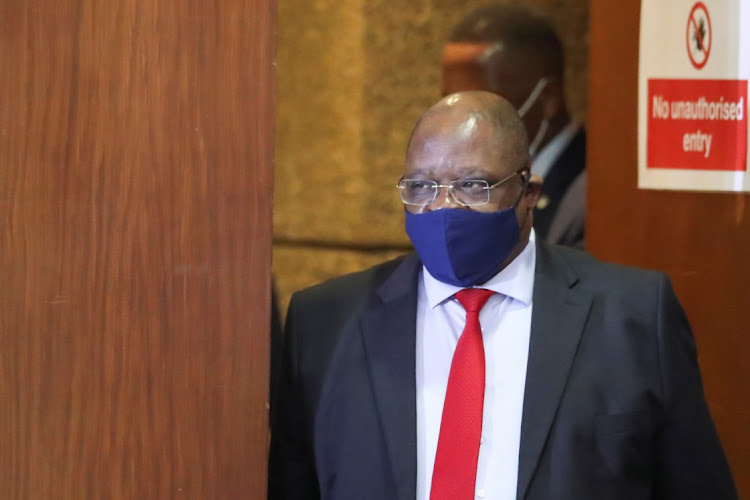 Zuma was supposed to appear at the commission on Monday after several witnesses implicated him in acts of state capture, but his lawyers wrote to the commission informing it that despite a Constitutional Court order compelling him to attend, he would not.

The former president's gripe with the commission is an alleged conflict of interest Zondo has when it comes to him.

Niehaus — who is also an ANC staffer employed in the office of secretary-general Ace Magashule — said he was addressing the media as part of the Gauteng branch of the Radical Economic Transformation (RET) forces grouping, which supports Zuma.

“His bias towards and constant targeting of president Zuma is blatantly clear. The manner in which he called press conferences to attack president Zuma when he was unable to attend the hearing of the commission because of illness, while he treated [public enterprises minister] Pravin Gordhan with the utmost deference and respect when he also did not attend the hearing, was shocking,” said Niehaus.

While the rain soaked the rolling hills of Nkandla in northern KwaZulu-Natal, it could not dampen the mood of supporters of former president Jacob ...
Politics
1 year ago

He slammed Zondo for refusing to recuse himself when Zuma made the application. The former president says the bias arises out of a family relationship — Zondo has a child with the sister of one of Zuma's wives.

“By tabling a written reply in response to president Zuma's submission concerning family relations between them, and other conflicts of interest, Zondo turned himself into a material witness in a matter in which he was also the judge,” said Niehaus.

He also slammed former public protector Thuli Madonsela, saying she illegally took away the rights of the then president by stating that he could not appoint the chairperson of the commission.

Niehaus said it was now clear that the commission was created to only target Zuma.

“In a recent interview on the SABC news channel, advocate Thuli Madonsela openly admitted that the Zondo commission was specifically established to target president Zuma and to make him responsible for state capture,” he claimed.

“It is clear from what Madonsela said that without targeting president Zuma, there is no Zondo commission.”

He further pledged his support for Magashule, who is facing charges relating to the asbestos project in Free State, saying they will not allow him to be forced by the ANC to step aside from his position.

Niehaus said Magashule was arraigned in a politically motivated trial, similar to other ANC members who support RET.

He said they will be out in support of Magashule at his trial this Friday and later Zuma when he appears for his own trial in the arms deal related corruption case.

Meanwhile, the Umkhonto we Sizwe national council said it was concerned by Zuma's no-show at the Zondo commission.

“It cannot be that a president who took an oath not once but twice to defend the constitution of our country, and went further to establish the commission on state capture, can be the one who violates that oath willingly,” it said in a statement.

“The Commissions Act obligates him to attend the hearings and state his case as a person of interest in that commission. That much has been reasserted by the highest court in our country, the Constitutional Court.”

uMkhonto weSizwe military veterans said they are ready to do their "level best" to protect former president Jacob Zuma from being arrested.
Politics
1 year ago