Samwu suspends municipal strike but dispute not over 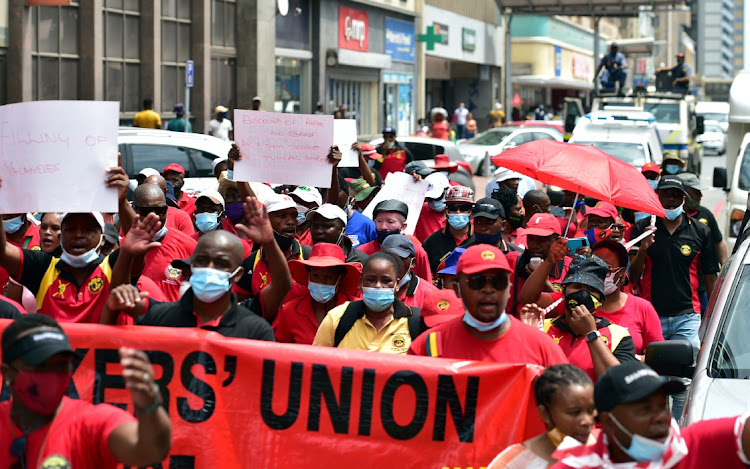 However, the union has warned that its dispute with the metro is not over.

It plans to file papers at the Labour Court on Wednesday motivating why essential service workers should be allowed to down tools.

The union and the municipality will also attend a bargaining council meeting on Friday, hoping to resolve the impasse.

Samwu, which wants workers to be paid a R7,500 Covid-19 danger allowance, is hopeful the interim interdict the city obtained from the Port Elizabeth Labour Court on Friday, compelling its members to return to work, will not be made a final order.

The striking workers want the danger allowance to be back-paid to March 2020.

They are also demanding a scarce skills allowance, and for contract workers to be permanently employed.

The Samwu-affiliated workers strike in Nelson Mandela Bay has been called off.
News
4 months ago

Workers affiliated to Samwu downed tools on Tuesday last week, bringing some services, such as refuse collection, to a standstill.

Though mayor Nqaba Bhanga announced on Monday that the strike had been called off, the union said it was merely suspended pending its court application.

He said it would submit the paperwork to the Labour Court on Wednesday and would challenge the ruling on February 26.

“We have informed the members about the current situation and felt it was unfair for the essential workers as they also have a right to participate in [a] strike should the working conditions be unconducive,” he said.

Kortjan said union officials would meet municipal bosses at the bargaining council on Friday, saying they would negotiate favourable outcomes for their members.

In a statement, Bhanga said all Bay essential workers had been compelled to return to work.

The mayor said the strike had disrupted service delivery, with some residents being without water and electricity due to striking city employees causing damage to infrastructure systems.

“As the city, we condemn the acts of violence that were displayed last week, which included intimidation against our staff members and tampering with our infrastructure, which inconvenienced many of our residents,” he added.

Stressing that the Nelson Mandela Bay municipality could not afford to meet  workers’ demand for a R7,500 Covid-19 danger allowance, mayor Nqaba ...
News
4 months ago

Samwu previously denied its members had vandalised infrastructure or intimidated their non-striking colleagues.

Bhanga said the city had a strategy to deal with the backlog in service delivery caused by the strike.

Municipality spokesperson Mamela Ndamase confirmed that the city would be engaging with the unions on Friday at the bargaining council.

When asked about Samwu not backing down on its demands, Ndamase said: “We are still waiting for the unions to come up with a consolidated demand.”

At a media briefing last week, Bhanga said the R7,500 Covid-19 danger allowance demand was unreasonable and the municipality could not afford it because the economy had been devastated by the Covid-19 pandemic.

Bhanga called on Samwu to go back to the negotiating table, and engage with the Independent Municipal and Allied Trade Union (Imatu) to come up with a reasonable figure to resolve the impasse.

It was previously reported that Imatu had demanded the coronavirus danger allowance be capped at R1,500.