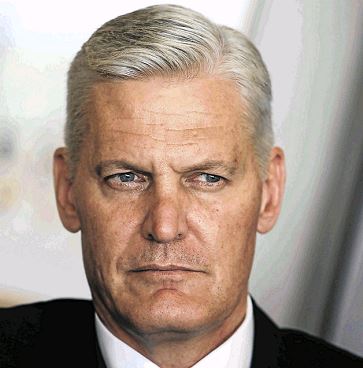 Eskom CEO Andre de Ruyter is set to face a parliamentary investigation over allegations of impropriety made by the company’s suspended chief procurement officer, Solly Tshitangano.

Parliament's public finance watchdog, the standing committee on public accounts (Scopa), is set to institute the investigation into De Ruyter. This follows the suspension of a scheduled appearance by the beleaguered state-owned company and its government shareholder representative, the public enterprises department, before the committee on Wednesday morning.

The meeting was meant to discuss applications that Eskom had made to the National Treasury to deviate from normal procurement processes in the first two quarters of the financial year that ended in 2021, as well its latest financial results, which saw the troubled entity lose R20bn.

But the meeting was called off because Scopa received a letter from Tshitangano that had a material bearing on matters set for discussion at the meeting.

Tshitangano’s letter, which was sent to public enterprises director-general Kgathatso Tlhakudi and copied to Scopa, detailed a number of irregularities allegedly committed by De Ruyter.

MPs serving on Scopa also said they wanted to quiz Tshitangano about the deviation applications, saying that it would get legal advice on whether it could call him to appear before it despite his suspension.

Eskom could shave a fifth or more from its bloated cost base as it gets a grip on its procurement and capital spending, putting disciplines back in ...
Business
1 year ago

However, public enterprises minister Pravin Gordhan said the committee should continue with the scheduled hearing on Wednesday as the power utility’s executive and accounting officer, De Ruyter, was present - and that Tshitangano had no “standing” inside Eskom due to his suspension.

But MPs dismissed this, saying a meeting between Scopa and Eskom last week had been postponed precisely because executives did not give satisfactory responses.

Tshitangano was placed on precautionary suspension last week, a day before Eskom appeared at Scopa, over poor performance. He is due to attend a disciplinary hearing.

The announcement of his suspension came after the Sunday Times reported that the board and public enterprises department were informed of tension between Tshitangano and De Ruyter by Tshitangano last February.

The extent of the tension saw De Ruyter allegedly attempt to move Tshitangano from his position, while the former Treasury man accused his boss of breaking the rules while procuring services. He also accused De Ruyter of acting to benefit some service providers, as he targeted others. Among the issues is a R5bn fuel oil tender Eskom has asked the courts to review, claiming it was riddled with irregularities and corruption.

As strong-arm tactics fail to entice defaulting municipalities to pay their spiralling Eskom debt, the utility is piloting an “active partnership” ...
News
9 months ago

MPs on Wednesday morning accused Eskom’s board - led by chairperson Prof Malegapuru Makgoba - of failing to investigate the “serious” allegations against De Ruyter.

Scopa chairperson Mkhuleko Hlengwa said instability at such a key and strategic institution ought to have been investigated.

“It needs a speedy resolution so we can restore a semblance of stability at Eskom,” he said.

“It does not augur well to have the kind of standoff that we have now ... when you have formal correspondence from a senior member of the executive of Eskom in the form of the CPO, suspended or not, making allegations against the CEO.

“And then, of course, juxtaposing the allegations that he makes against the very sad picture the AG [auditor-general] paints insofar as the audit outcomes of Eskom are concerned - including, but not limited to, the expansions and deviations - then you've got every reason to be concerned.

“The CEO, largely whom the allegations are made against, will [also] be given an opportunity to make representations to the committee. Mr Tshitangano himself will have to come speak to the allegations that he's made, and the board will most likely as well have to account for its role in how it dealt with these allegations against the CEO. Then we will make a determination once we have heard all three sides of the story.”

Makgoba told MPs at the meeting that Tshitangano apparently started complaining about De Ruyter once issues of performance were raised against him.