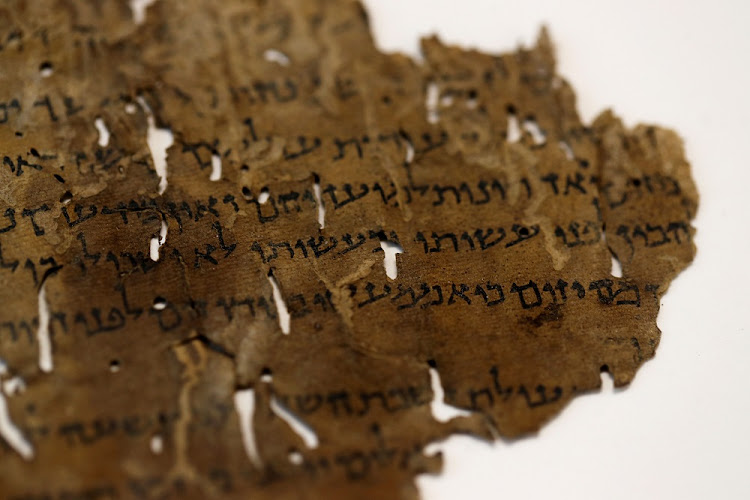 A fragment from the Dead Sea Scrolls that underwent genetic sampling to shed light on the 2,000-year-old biblical trove is shown to Reuters at the Israel Antiquities Authority (IAA) laboratory in Jerusalem.
Image: REUTERS/ RONEN ZVULUN

Israeli archaeologists racing against treasure hunters to search caves near the Dead Sea have discovered a trove of artefacts, including fragments of a biblical text, the like of which has not been seen for decades.

The finds, preserved by the hot, dry air of the Judaean desert, also include the 6,000-year-old partly mummified skeleton of a child, and a perfectly intact, finely woven basket dating back 10,500 years that the Israel Antiquities Authority said on Tuesday was likely to be the oldest in the world.

The Authority has overseen a survey of more than 100km of cliffs and the caves carved or eroded into them.

The fragments of parchment, about 2,000 years old, bear biblical verse, written in Greek, and match a scroll discovered about 60 years ago called the “Book of the 12 Minor Prophets”.

That scroll is one of a trove of ancient Jewish texts called the Dead Sea Scrolls that were found in 1947 by local Bedouin in the caves of Qumran, about 20km east of Jerusalem.

The collection, which has come to include texts discovered elsewhere along the western shore of the Dead Sea, provided a window into Jewish society and religion before and after the time of Jesus.

A flurry of exploration followed their discovery but the search eventually petered out — until recently, when new pieces of scrolls and parchment appeared on the black market.

The likelihood that antiquities robbers had found a new trove spurred the Authority into action.

Since 2017, crews have been abseiling down marl and limestone cliffs and using drones to map hundreds of caves and hollows.

Chief justice Mogoeng Mogoeng will appeal against a decision by the Judicial Conduct Committee (JCC) which ordered him to apologise for, and ...
News
6 months ago

Many were filled with centuries of sand and debris, and about a dozen said to be likely hiding places were excavated fully.

The new fragments of manuscript were found in the “Cave of Horror”, which years ago yielded up the 1,900-year-old skeletons of Jewish rebels who had fought against the Roman Empire.

“These are new pieces of the puzzle and we can add them to our greater picture of the period and of the text,” said Oren Ableman of the Antiquities Authority's Dead Sea Scrolls Unit.

“Even though these pieces are small, they did give us some new information that we did not know before.”

The fragments allowed the reconstruction of 11 lines of text, and provided insight into the parchment the text is written on.