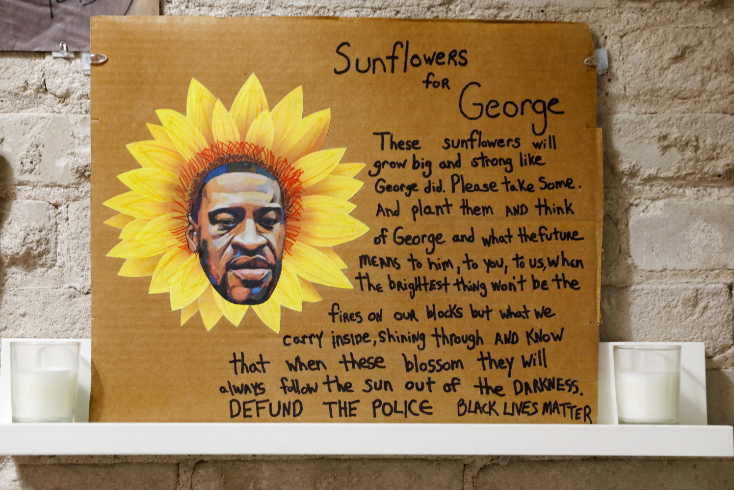 Mementos dedicated to George Floyd are on display at the Chicago Fine Arts Gallery near George Floyd Square, while the city of Minneapolis enters its third day of the trial of Derek Chauvin, who is facing murder charges in the death of George Floyd, in Minneapolis, Minnesota, US, on March 31 2021.
Image: REUTERS/Octavio Jones

George Floyd's girlfriend smiled through tears as she told a jury on Thursday how they first met when he offered to pray with her, less than three years before his deadly arrest, and described how they both struggled with opioid addiction.

Courteney Ross was the first person who personally knew Floyd to testify at the murder trial of Derek Chauvin, the white former Minneapolis police officer caught in widely seen video kneeling on the neck of Floyd, a 46-year-old handcuffed Black man, for about nine minutes. The footage sparked global protests against police brutality.

“It's a classic story of how many people get addicted to opioids,” Ross, 45, who wore a heart-shaped brooch on her black jacket, told the jury. “We both suffered from chronic pain: mine was in my neck, his was in his back.”

Chauvin has pleaded not guilty to murder and manslaughter charges. In a central dispute of the trial, his lawyers have argued that Floyd's death, ruled a homicide at the hands of police, was really an overdose caused by the fentanyl found in his blood at autopsy.

Prosecutors from the Minnesota attorney general's office have told the jury they will hear evidence to contradict this, including Ross's testimony about his drug tolerance, and that Floyd's drug use is irrelevant to the charges against Chauvin.

Here are some key moments from the fourth day of witness testimony:

Almost exactly a year before George Floyd was killed in a deadly arrest by Minneapolis police officers in May 2020, he found himself in another ...
News
1 month ago

“It's one of my favorite stories to tell,” Ross said, smiling toward the jury, when asked by a prosecutor how she first met Floyd in August, 2017, at a Salvation Army homeless shelter, where he worked as a security guard.

She was waiting in the lobby to see the father of her son, tired after closing up the coffee shop where she worked. Floyd approached her.

He sensed she felt alone, and offered to pray with her.

They had their first kiss in the lobby that night and, but for the occasional break after a lovers' quarrel, were together until his death, she said.

They took walks in the parks and around the lakes of Minneapolis, which was still new to the Texas-raised Floyd, and ate out a lot: “He was a big man,” she said, describing his daily weightlifting, “and it look a lot of energy to keep him going.” She said he adored his mother, who died in 2018, and his two young daughters.

Two jurors seated in the trial of Derek Chauvin, the former Minneapolis police officer facing murder charges over his arrest of George Floyd, were ...
News
1 month ago

“Addiction, in my opinion, is a lifelong struggle,” she said. “It's not something that comes and goes, it's something I'll deal with forever.”

Chauvin' lead lawyer, Eric Nelson, asked Ross many questions in cross-examination about how the couple got their drugs and an episode where Floyd took himself to a hospital emergency room for what proved to be a non-fatal overdose.

She said she thought Floyd sometimes bought pills from Morries Hall, who was sat in the car next to Floyd in the front passenger seat when police arrived last May.

Nelson has subpoenaed Hall to testify when the defense presents its case, and has told the jury that Hall and a woman in the car would tell them that they saw Floyd swallow two pills before police arrived on May 25 and that he fell into a deep sleep.

Through a lawyer, Hall said he would invoke his constitutional right against self-incrimination if called to testify, and asked Hennepin County District Judge Peter Cahill to quash the subpoena.