The world’s glaciers are losing mass, and more quickly than thought, adding to sea levels rising 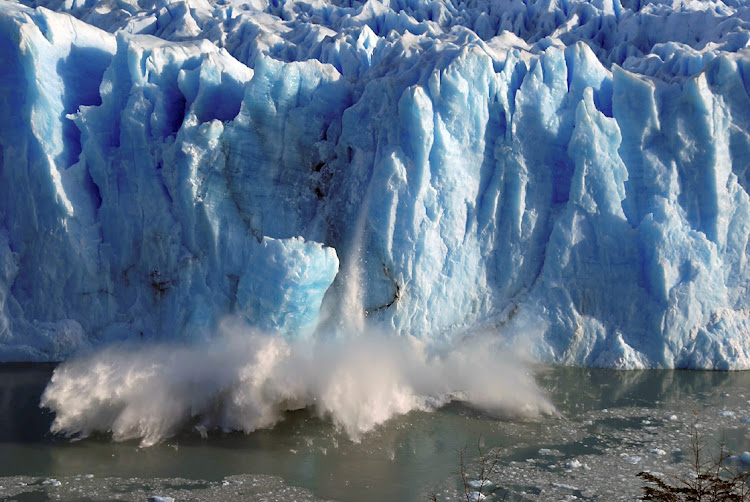 Ice peels off from the Perito Moreno glacier in the Patagonian province of Santa Cruz, Argentina.
Image: REUTERS/ ANDRES FORZA

Nearly all the world’s glaciers are losing mass — and at an accelerated pace, according to a new study published on Wednesday that could affect future projections for ice loss.

The study in the science journal Nature provides one of the most wide-ranging overviews yet of ice mass loss from about 220,000 glaciers around the world, a major source of sea level rise.

Using high-resolution imagery from Nasa’s Terra satellite from between 2000 and 2019, a group of international scientists found that glaciers, with the exception of the Greenland and Antarctic ice sheets, which were excluded from the study, lost an average of 267 gigatonnes (Gt) of ice per year.

President Cyril Ramaphosa has reiterated the need for SA to prioritise the reduction of emission of greenhouse gases in the global fight against ...
News
8 months ago

The researchers also found that glacier mass loss accelerated. Glaciers lost 227Gt of ice annually from 2000 to 2004, but that increased to an average of 298Gt each year after 2015.

The melt was significantly affecting sea levels by about 0.74mm a year, or 21% of overall sea level rise observed during the period.

Glaciers tend to have a faster response to climate change compared to ice sheets in Greenland and Antarctica, and are currently contributing more to sea level rise than either of the ice sheets in those regions, scientists said.

The study could fill important gaps in understanding about ice mass loss, leading to more accurate predictions, said co-author of the study Robert McNabb, a remote sensing scientist at Ulster University in the UK. Previous studies looking at individual glaciers only account for about 10% of the planet, he said.

In Earth Day message, pope warns that planet is “at the brink”

Pope Francis said in his Earth Day message on Thursday that the planet was "at the brink" and humanity had to avoid "the path of self destruction."
News
9 months ago

Scientists have long warned that warming temperatures driven by climate change are eating into glaciers and ice sheets around the world, contributing to higher sea levels that threaten the world’s populous coastal cities. The latest reports by the Intergovernmental Panel on Climate Change project that future sea levels will rise by more than a metre by 2100.

Some glaciers in Alaska, Iceland, the Alps, the Pamir mountains and the Himalayas are among the most affected by melting, researchers found. Glaciers with surrounding communities provide an important water source and their decline could lead to serious food and water shortages.

“Those areas are seeing a rapid pace of glacier melt that could be fairly worrying,” McNabb said. “We get this increase in melt and that actually increases the availability of water in these rivers ... but the problem is, after a period of time, that stops increasing then decreases fairly rapidly.”

While the study did not delve into the cause of the glacial retreat, rising temperatures, widely believed by scientists to be the result of human emissions, are inevitably leading to more ice loss, McNabb said.

Cape Town's coastal tourism is under threat from rising sea levels and beaches are likely to disappear.
News
1 year ago

“It’s hard to separate that the temperature is what is causing the melt with humans, by and large, causing that increase in temperature,” he said.

Once glacial ice melts, it could take decades or centuries to regrow because it must pile up year after year, scientists said. The study reiterates that the world must bring down global temperatures to slow ice loss, said Twila Moon, a glaciologist at the US National Snow and Ice Data Center who was not involved in the study.

“I have no expectation, in all honesty, that even substantial action to reduce our emissions and control the Earth’s temperature rise is going to grow our glaciers,” Moon said. “We’re at a point where we’re trying to keep as much ice as possible and slow that rate of loss.”

While researchers identified instances in which melt rates actually slowed between 2000 and 2019, such as Greenland’s east coast, they attributed that to a weather anomaly that led to higher precipitation and lower temperatures.

McNabb said the study’s overall picture was one of “fairly rapid” ice mass loss, with no indication it would change soon, but there is still time to put the brakes on melt by reducing emissions.

“When you see something like this where glaciers are losing mass, it’s getting faster, that sounds really bad,” he said. “But we can do something here, we need to act.”