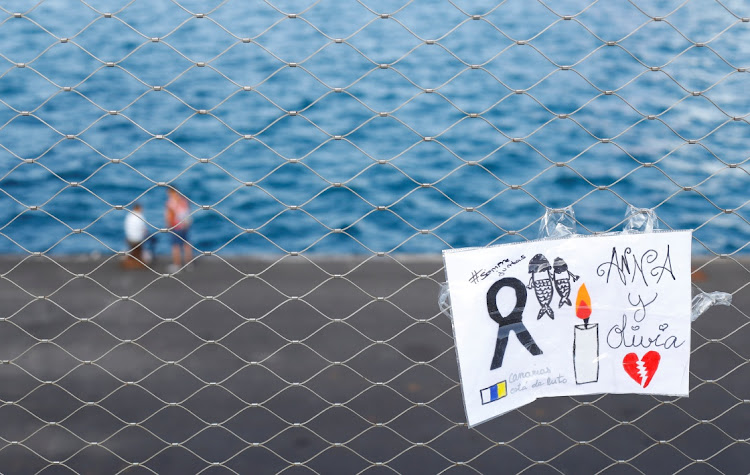 A sign placed on a fence in memory of the missing girls in the Canary Islands is seen in Santa Cruz de Tenerife, Spain, on June 11 2021.
Image: REUTERS/Borja Suarez

The child whose body was found inside a bag weighted down with an anchor in the ocean off the Spanish island of Tenerife died from drowning, an autopsy found on Saturday, as rescuers prepared to renew the maritime search for her infant sister.

Their father, Tomas G., is the main suspect in the disappearance of Olivia, 6, and Anna, 1, after he failed to return them to their mother as agreed at the end of April. He is also missing.

An autopsy found that Olivia died from pulmonary edema, or an excess of water in the lungs, according a statement from the Canary Islands Superior Court.

Rescuers prepared to renew the hunt for Anna and her father after returning to port in Tenerife because of technical problems with the search vessel.

The disappearance of the girls prompted angry demonstrations in cities across Spain on Friday.

"All Spain is shocked, all our support for the families whose pain is absolutely unbearable and unimaginable, all our rejection of sexist violence, the vicarious violence that some still deny in our country," Prime Minister Pedro Sanchez said on Friday during a visit to Costa Rica.

Olivia's body was found on Thursday afternoon at a depth of 1,000 metres inside a sports bag tied to an anchor near to where her father's boat was drifting.