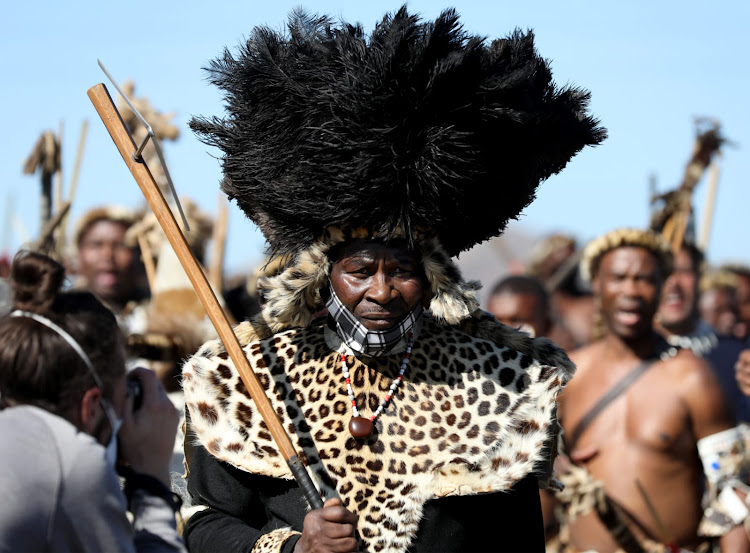 Leader of the Zulu regiments Zihogo "Mgilija" Nhleko has been expelled for his role in leading Amabutho in support of former president Jacob Zuma.
Image: Sandile Ndlovu

Zihogo “Mgilija” Nhleko has been expelled for, among other things, leading regiments of Zulu warriors (amabutho) to Nkandla in support of former president Jacob Zuma.

Dumisani Khumalo, chairman of the Usuthu Traditional Council, said in a statement that Nhleko — leader of the amabutho — was guilty of “repeated transgressions and unacceptable conduct”.

His expulsion was confirmed after a meeting this week, where Khumalo said it was decided that “Mr Nhleko’s conduct can no longer be tolerated”.

King Misuzulu kaZwelithini was in full support of the decision, the traditional council said.

Amabutho arrived in large numbers and bolstered uMkhonto weSizwe Veterans Association members in support of Zuma. But the stationing of the warriors at the Nkandla homestead was “unsanctioned” and a “clear act of defiance”, traditional prime minister to the Zulu monarch and nation, Prince Mangosuthu Buthelezi, said.

It remains unclear why Niehaus was arrested but some MKMVA members suspect he may face charges of inciting violence.
News
1 year ago

“His Majesty King Misuzulu kaZwelithini, together with the Queen Mother, Her Majesty Queen Mayvis maZungu, and the Zulu royal family, wish to distance themselves from the actions of Mr Zihogo Maguzumbela Nhleko, known to many as Mgilija.

“We have noted that Mr Nhleko led a group of people dressed in Zulu attire and accoutrements to Nkandla to join those who are sympathising with the former president, Mr Jacob Zuma. Mr Nhleko did this without any instruction from the king or the royal family, or from me as the traditional prime minister to the Zulu monarch and nation,” Buthelezi said.

In his statement on Thursday, Khumalo said that Nhleko's misconducted started before the death of Zulu monarch Goodwill Zwelithini kaBhekuzulu in March this year.

“At the celebration of the last First Fruits Ceremony (Umkhosi Wokweshwama), which is held annually at Enyokeni Royal Residence, Mr Nhleko actually exchanged words rudely with the King himself, to the extent that the King gave instruction that a date be fixed to discuss his conduct, because the King felt insulted by Mr Nhleko answering him back rudely.

“Since the passing away of the King, Mr Nhleko has transgressed in a number of incidents. On the day of the King’s burial, after the service, he marched with regiments in the courts of the palace, chanting — which is not done at the death of anyone, let alone the King. The King’s traditional prime minister Prince Mangosuthu Buthelezi had to reprimand him and ask them to leave the precincts of the Royal Court immediately,” the statement read.

He also cited a transgression at the time of a ritual hunt held to coincide with when the monarch's widows discard their mourning dress.

“That ceremony is normally accompanied by a ritual hunt which is led by whoever is the leader of the nation of the time. This time the leader of the nation was already His Majesty King Misuzulu. But because he had a bout of flu he could not attend the ritual hunt. It was therefore decided that the two ceremonies be separated, and that the discarding of the mourning dress go ahead while the ritual hunt was postponed until the King was well enough to lead the hunt himself, as that is the day on which he cleanses his father’s spears and guns (his weapons).

“Buthelezi therefore phoned Mr Nhleko and warned him not to attend any hunt that might be arranged, as it was rumoured that certain elements in the Royal Family who did not want to recognise King Misuzulu had decided to go ahead with the hunt without him. The Prime Minister warned Mr Nhleko not to attend the hunt at that time, and Mr Nhleko agreed.

“But he then went ahead and attended the unauthorised hunt which took place,” said Khumalo.

Former president Jacob Zuma has officially been jailed. The correctional services department confirmed at 1.50am on Thursday that Zuma had “been ...
News
1 year ago

This was followed by a video, said Khumalo, where Nhleko says that, as far as he is concerned, there is no king.

“In other words he does not recognise King Misuzulu as king,” said Khumalo.

The royal family also took issue with Nhleko wearing traditional headwear to Nkandla at the weekend when that adornment is meant to be worn only at the ceremony of the First Fruits.

“Mr Nhleko transgressed by wearing that headgear at Nkandla. That was not the first time he had worn it inappropriately,” said Khumalo.

A meeting on Tuesday at the KwaKhangelamankengane Royal Residence, convened by King Misuzulu, agreed with the removal of Nhleko. Minutes of the Usuthu Traditional Council's earlier meeting were read out at the meeting.

“Since he had himself publicly said that he does not care if he is removed, it was decided to oblige him by announcing that he no longer plays any role in the regiments in the capacity in which he served before.

This was a collective decision, supported by His Majesty the King, in the presence of all of us. Prince Buthelezi has never conflated his position as prime minister to the king and the Zulu nation with that of his position in politics. Moreover, the decision to remove Mr Nhleko had nothing to do with politics. It was precipitated by his own behaviour,” said Khumalo.