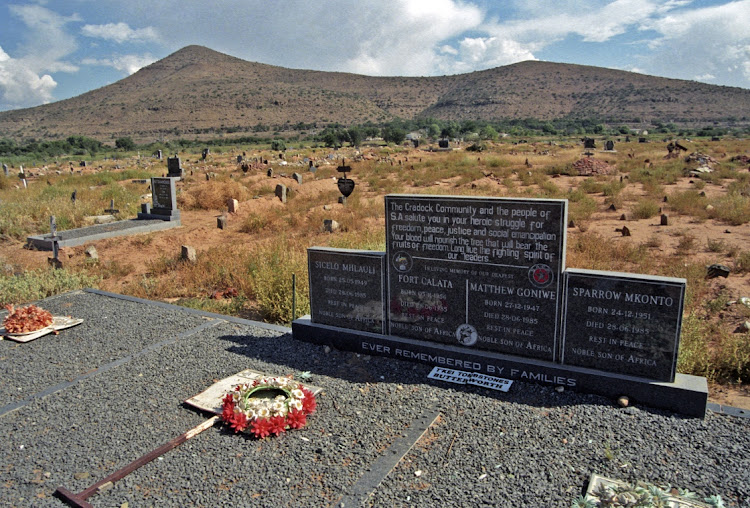 Lukhanyo Calata, son of slain activist Fort Calata, has resorted to court in a bid to compel the National Prosecuting Authority (NPA) to make a decision on whether it will prosecute those suspected of being behind the 1985 murder of the Cradock Four.

The application was launched in the Pretoria high court on Tuesday on the 36th anniversary of the funeral of Calata and fellow activists Matthew Goniwe, Sparrow Mkonto and Sicelo Mhlauli, who were murdered by apartheid security forces in June 1985, the Fort Calata Foundation said in a statement.

Their brutalised bodies were burnt and left in bushes near Bluewater Bay, Gqeberha.

The murders sparked national and international outrage, and further fuelled the anti-apartheid movement.

Calata, with Mkonto and Mhlauli’s widows, Sindiswa Mkonto and Mbuyiselo Mhlauli, will also ask the high court to compel police minister Bheki Cele and police commissioner Khehla Sitole to ensure the Hawks finalise their investigations into the murders of the Cradock Four within 30 days of the court’s order.

Lawyers for Cradock Four push NPA for a decision on prosecutions

A law firm representing the families of the Cradock Four has demanded that the National Prosecuting Authority decides by no later than July 10 on ...
News
1 year ago

Calata said despite 36 years passing and countless pleas from the families of the Cradock Four, the SAPS had failed to finalise its investigations and the NPA had yet to take a decision whether to prosecute “known suspects”.

He accused the government of taking steps to ensure perpetrators of apartheid-era crimes were protected from prosecution.

“I submit that the failure to finalise the Cradock Four case represents a deep betrayal of those who gave their lives for the struggle for freedom and democracy in SA.

“It has also added significantly to the emotional trauma and anguish of their families, surviving victims and the wider community.”

Apart from the NPA, justice ministry and police ministry, the respondents in the court case read like a who’s who of apartheid-era cabinet members and security and intelligence top brass.

A political trailblazer in her own right and described as kind and compassionate by her family, the widow of one of the slain Cradock Four, Nyameka ...
News
1 year ago

Calata said no direct relief would be sought against any of these men in the proceedings, but that they were cited because they were named in the papers and because of any “possible role” they may have played in relation to the murder of the four activists.

“I am advised that these respondents will not necessarily be suspects or accused in any subsequent criminal proceedings,” he said.

Calata mentioned a deliberate policy or decision to abandon or suppress the case, and accused the state of turning its back on victims who had sacrificed so much.

Uncut grass, corroding concrete and material pieces with names of the monument’s honourees scattered on the ground describe the eyesore that the ...
News
9 months ago

The Truth and Reconciliation Commission denied amnesty to several of those directly involved in the murders but, despite the TRC referring this case and about 300 others to the NPA, none were pursued.

“My family and I do not believe that the SAPS and NPA are acting in good faith.

“Indeed, we have lost all confidence in the prosecutors and police.

“Given their past idleness, such investigations could drag on indefinitely while witnesses and suspects grow old and die.”

Included in the confirmatory affidavits is one from former national director of public prosecutions advocate Vusi Pikoli.

In it, he confirms there was political interference that had “effectively barred or delayed the investigation and possible prosecution” of cases referred by the TRC to the NPA for prosecution, including the Cradock Four.

“The political interference visited upon the NPA is deeply offensive to the rule of law and any notion of independent prosecutions under the constitution.

“It explains why the TRC cases have not been pursued.

“It also explains why the murders of the Cradock Four were never investigated with any vigour.”

In the 134-page affidavit, Calata traverses the terrible time leading to the kidnap and murder of the four, the findings of two inquests into their deaths, the TRC amnesty findings, the role of the state security system  and the findings of private investigations into the murders.