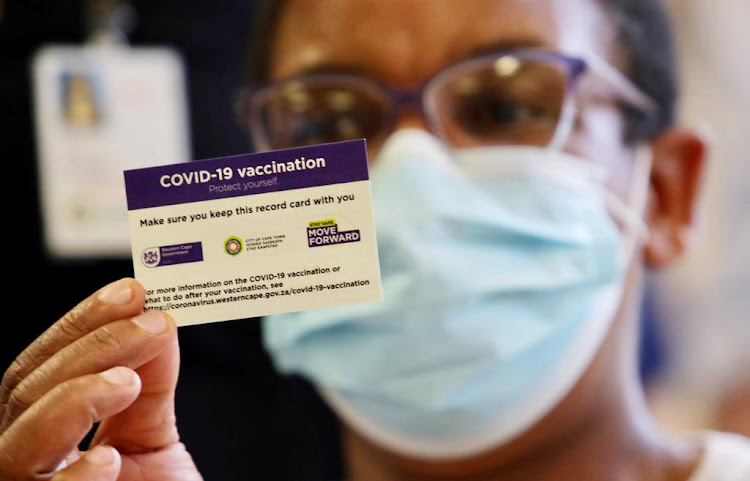 Vaccine cards are issued to those who have had the jab. Stock photo.
Image: Esa Alexander/Sunday Times

Dr Keith Cloete, head of health in the Western Cape, has issued a stern warning: anyone fraudulently trying to get a vaccine certificate without being vaccinated will face the full might of the law.

Speaking at the department’s weekly digicon on Covid-19 in the province, he said, “We have had reports of people fraudulently trying to get a vaccine card to enable them to travel without getting the vaccine. On so many levels, this is troubling for us. Those people will be reported, investigated, and followed up — and the full might of the law will be visited upon them,” he said.

He said that any person involved in the rollout who “allows this practice to flourish” will be contributing to “untold damage” in the fight against Covid-19, and they too — along with the person seeking the fraudulent card — will be severely dealt with.

Also on the topic of those who had not been vaccinated, Cloete noted their high presence in ICU and high care admissions.

He said doctors working in the province, who had battled through all three waves, had witnessed so many lives lost.

In the third wave, doctors had told him “without fail” that those getting critically ill and dying are those who are unvaccinated.

He said that data from the UK, which is more robust as their vaccine rollout is older, “very clearly documented” this same pattern.

The hotspot for hesitancy in the province is Mitchells Plain, according to Cloete, where only about a quarter of eligible people had registered.

“The phenomenon of that area is something we are examining to find out exactly what the drivers are. We have done general awareness raising, but have also started doing targeted interventions in such areas. We are asking questions like: Who are the opinion leaders there, and how is information distributed? We have started with religious leaders, but we are also looking at other community opinion leaders,” he said.

This was against a backdrop of the province still being in the throes of the third wave peak, albeit some “very early signs” of a decline were beginning to come through.

The recent violence and looting in KZN and Gauteng have forced people to go without chronic medication and check-ups, caused shortages at blood banks ...
News
5 months ago

Hospitalisations are flattening, but oxygen use is going up, and the reproductive number is still 1.1 which means the province is not yet off the peak.

Of those being tested, 41.5% are turning up positive and that is “high,” said Cloete, adding that there were on average 3,004 new daily infections in the province with about 339 hospital admissions per day.