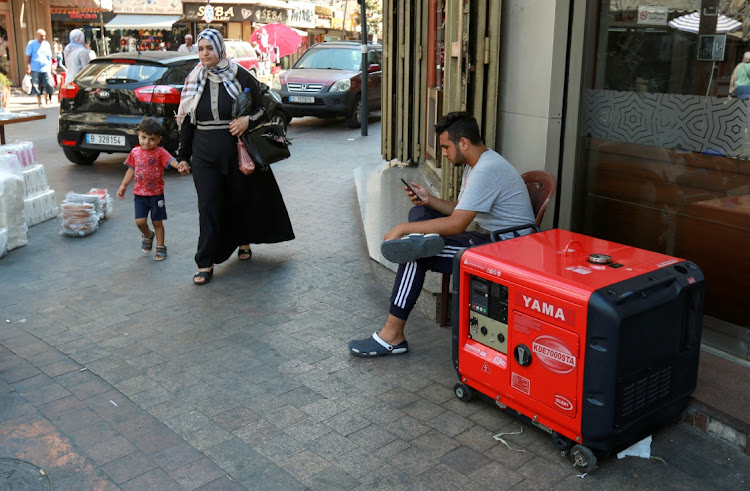 A woman with a child walk past a portable generator, which provides electricity, in Sidon, Lebanon, August 11, 2021.
Image: REUTERS/Aziz Taher

Lebanese President Michel Aoun called an emergency meeting to discuss a worsening fuel crisis on Friday but was rebuffed by the prime minister as political paralysis obstructed efforts to find a solution, even as much of the country grinds to a halt.

Dwindling fuel supply has plunged Lebanon into extended blackouts and long queues for petrol and bread, with many bakeries and hospitals almost forced to close. Angered by the government's inaction, protesters blocked roads across the country.

This week the central bank announced an effective end to fuel subsidies that have drained the reserves at a time when Lebanon is in a state of financial collapse.

The government opposes the move, which will prompt prices to rise sharply, and criticises the central bank for not reversing the move, while importers say they will not extend supplies until an agreement is reached.

However, Central Bank Governor Riad Salameh said on Friday that the government had been aware of the decision announced on Wednesday to start extending lines of credit for fuel imports at market rather than heavily subsidised exchange rates, effectively ending the subsidy system.

The government has accused Salameh of acting alone and said prices should not change, arguing that the damage of ending the subsidies was greater than the benefits of preserving the mandatory hard currency reserve which the central bank is trying to shield.

In comments published by Radio Free Lebanon whose accuracy he confirmed to Reuters, Salameh said he informed officials that parliament needed to pass a law authorising a dip into those reserves.

A Lebanese court on Thursday dismissed a judge who had charged top politicians with negligence over 2020's Beirut port explosion, infuriating ...
Africa
10 months ago

Earlier on Friday, President Michel Aoun's invitation for a special urgent cabinet meeting on the crisis was rejected by caretaker Prime Minister Hassan Diab as unconstitutional.

Diab has refused to hold a cabinet meeting since he and his administration resigned one year ago in the wake of the Beirut port explosion. The formation of a new cabinet has been obstructed by squabbling among sectarian politicians over shares in a new administration.

In a statement, Aoun said Salameh refused to reverse his decision, and blamed him for the worsening crisis.

“The central bank is an entity of public law, and the government is the one who sets general policies in all fields,” he said.

Most recently, the central bank had been providing dollars for fuel imports at 3,900 Lebanese pounds per dollar, far less than the market rate of more than 20,000.

Lebanon's currency has lost more than 90% of its value in less than two years, and more than half of the population is now in poverty.

Lebanon and Israel, formally still at war after decades of conflict, launch talks on Wednesday to address a long-running dispute over their maritime ...
News
1 year ago

Local media reported the hijacking of a fuel tanker and a shooting at a petrol station, incidents which have recurred over the past week.

The government is demanding Salameh reverse his decision until a programme to provide cash cards to citizens is implemented.

Lebanon's oil directorate said on Friday that oil importers and facilities must supply the quantities of fuel they had purchased before the central bank decision as they wait for the central bank to set the new rate.

Maroun Chammas, member of The Association of Petroleum Importing Companies, said that importers were insistent on a unified exchange rate for buying and selling fuel.

He urged the central bank and government come to an agreement within hours, not days to avoid catastrophe, in comments to local news channel MTV.

The directorate “called on all to assume their responsibilities in ensuring the necessary lines of credit to secure the fuel supply.”

Salameh did not respond to a question from Reuters on fuel imports.