US aircraft departed Kabul packed with 640 refugees on the floor 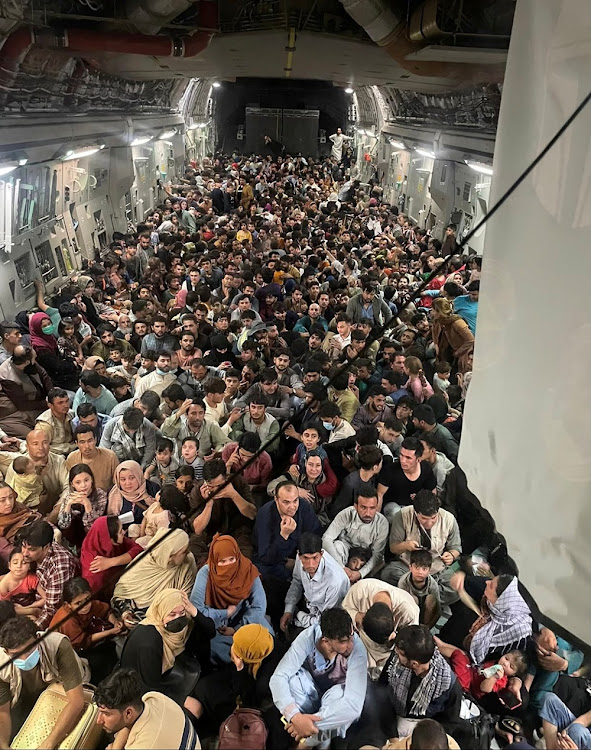 US military transport aircraft took off from Kabul crammed with refugees on Monday after terrified civilians overran the airport and forced their way onto aircraft.

In one incident, a US Air Force C-17 Globemaster took off from the besieged capital with 640 men, women and children sitting on the floor of its hold.

The crew had not planned to carry such a large load but were unable to prevent people from clambering aboard through the half-open ramp at the rear of the aircraft, according to reports.

An audio clip of an air traffic controller asking about the number of people aboard the aircraft, whose call sign is Reach 871, has now gone viral.

The crew, who believed they had even more people aboard than the official tally, elected to take off.

Awful, chaotic scenes at Hamid Karzai International Airport. People scrambling and no where to go. Woman says "look at the state of the people of Afghanistan" #Kabul pic.twitter.com/5Ohe1c81uB

“OK, how many people are on your jet?” the controller asks. “Eight-hundred people on your jet? Holy cow ... Good job getting off the ground!”

The refugees, all reportedly legitimate evacuees, were flown to Qatar, where officials confirmed the number of people aboard.

It was the second-largest number of people ever carried aboard a single aircraft, Defense One reported. In 2013, another C-17 carried 670 people who were fleeing a typhoon in the Philippines.

The refugees sat on the floor of the aircraft, using cargo straps as makeshift seat belts, Defense One added.

The C-17 is designed to carry 77 tonnes of cargo or 102 to 134 troops and their personal equipment. By comparison, the double-decker Airbus A380 can carry a maximum of 853 passengers though typically has enough seats for 575.

A SA contractor described chaotic scenes at the airport on Monday as civilians scaled the walls and rushed the apron.

“Everybody’s evacuating ... The airport itself is crazy, with locals trying to flee the country, which makes it difficult for the rest of us to evacuate,” he said to a backdrop of machine-gun fire and US Apache gunships thudding overhead.

Video clips on social media showed mobs of people running alongside a taxiing C-17 with people clambering onto the doors while other clips showed helicopter gunships flying low over crowds to force them off the runway.

The chaotic scenes of people mobbing taxiing aircraft forced the US military to temporarily close the airport to all flights until enough troops could be landed to form security cordons around the aircraft.

On Monday, a German military aircraft sent to fetch a group of 145 German citizens left with only seven people aboard — one of whom was an Afghan citizen —  due to the chaos on the ground.

German chancellor Angela Merkel briefed parliamentarians that US and Turkish troops control only a small, isolated part of the military section of the airport with Taliban fighters controlling access, reported The Guardian.

Taliban declares ‘war is over’ as president and diplomats flee Kabul

The Taliban declared the war in Afghanistan was over after insurgents took control of the presidential palace in Kabul as US-led forces departed and ...
News
3 months ago

The SA contractor, whose company was pulling out of the country, said it was unclear when he and his colleagues would get a flight.

While military flights resumed late on Monday, commercial flights remain suspended as there were still large numbers of civilians occupying the commercial side of the airport.

The Taliban has not attempted to capture the airport.

“The Taliban have said they won’t hurt any of the expats and they want the extraction of the expats to be peaceful,” the contractor said.

The tankers are used as a “tanker bridge” to refuel the C-17s in flight. By reducing their fuel load, the transporters are able to carry more people.