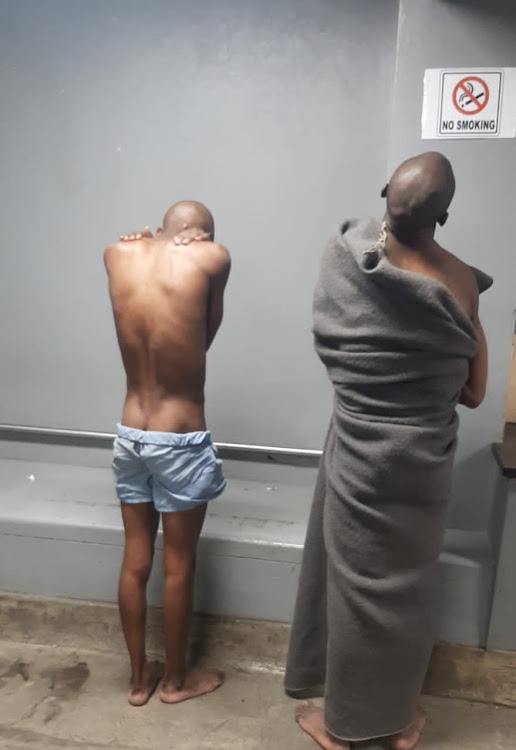 Joburg metro police confirmed that two convicted murderers were arrested after they kidnapped a baby during a home robbery on Thursday.
Image: JMPD via Twitter

Police have confirmed that two men who kidnapped a four-month-old baby on Thursday were convicted murderers who had escaped from the Leeuwkop prison.

The four-month-old girl has since been reunited with her family.

Johannesburg metro police department spokesperson Wayne Minnaar said on Thursday evening that the two had escaped from Leeuwkop before committing a home robbery in the north of Johannesburg.

“They were serving sentences of 10 years and 30 years for murders which they committed,” he said.

The pair abducted a baby during a home robbery in Beverley, north of Johannesburg on Thursday afternoon.

Shortly after their prison escape, the men gained access to the home from the back, Minnaar said.

“A domestic worker saw them from inside and locked the back door. It is alleged that the suspects kicked the door down, as well as a second door inside the house,” he said.

Fidelity CEO Wahl Bartmann told TimesLIVE that the owner of the home fled to the bathroom and called her husband and Fidelity Services.

He said when reaction officers arrived on the scene, the two men threatened to harm the baby if they came inside.

“They called for backup. The suspects, armed with knives, abducted the homeowner's baby and ran towards the Jukskei River. An Uber driver witnessed the two suspects carrying a child disappear through the bush towards the river,” he said.

A warning scream from a court clerk probably saved the life of a prosecutor who was attacked by a knife-wielding rapist — who was then shot dead by ...
News
9 months ago

Bartmann said officers called for additional backup from estates in Kyalami, Helderfontein and Dainfern. The officers went to the river and searched in the bushes.

“Shortly after a report came through that two suspects with a baby had hijacked a vehicle in Helderfontein,” he said.

Minnaar said that while on patrol near Diepsloot Mall, two metro cops spotted a white Toyota double cab driving at a high speed. The bakkie crashed into a ditch at R511 and Plum Street.

The two men were arrested on the scene.

2x suspects arrested by #JMPD #RegionA officers in Diepsloot for House Robbery & Kidnapping. The suspects had just escaped from Leeukop Prison where they were serving sentences for 10x & 30yrs for murders they committed when they kidnapped a 4 month year old baby in Fourways. pic.twitter.com/ynRkLf0XLo

“Correctional services were also called to fetch the suspects at the Diepsloot police station,” Minnaar said.

Correctional services said they would comment on the matter on Friday.