It's a fact: vaccination is the key to bringing Covid-19 under control - expert 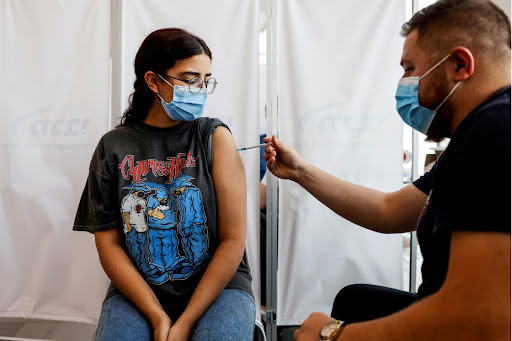 Communication is vital in persuading people to vaccinate. 'We need to understand people's concerns and see how best to address them,' says an expert. 'Much more work needs to be done to build trust.'
Image: REUTERS/AMIR COHEN

If everyone older than 60 were to vaccinate against Covid-19, SA would see the affect of the pandemic significantly reduced. Infections would be down, as would severe disease and fatalities.

These are the words of one of the country's leading scientists, Prof Koleka Mlisana, the head of the ministerial advisory committee on Covid-19 and the head of academic affairs and research at the National Health Laboratory Service (NHLS).

Speaking in an online session arranged by the University of Cape Town (UCT) as part of vice-chancellor Prof Mamokgethi Phakeng’s conversation entitled “Inviting Dissent” - which discussed whether to vaccinate or not - Mlisana said the recent statistics released by the Western Cape government showed that 92% of Covid-19 hospitalisations were unvaccinated people, which showed how effective the jab was.

So far the Western Cape has vaccinated only 38% of its population - and Mlisana said it was vital that the country “finds ways and means of increasing that percentage”.

Mlisana said that out of 2,455 Covid-19 hospitalisations in the Western Cape, only 200 (or 8%) were among people who had been vaccinated. She said that while vaccines didn't prevent Covid-19 infections, the latest data showed that the rate of infection and hospitalisation were significantly reduced among the vaccinated.

Mlisana said the evidence was clear that Covid-19 hospitalisations and deaths were in the unvaccinated population. She said this fact needed to go out to communities so that people could appreciate the impact of vaccines, but how the message is delivered is just as important.

“We do know that vaccinations prevent severe disease and death. We need to publicise this but communication is key. We need to understand people's concerns and see how best to address them. And when we address them, they've got to be appropriate messages for different communities and we need to make sure that they are packaged well,” she said.

She said the messages have to be delivered by people who people trust, such as politicians, religious leaders and pharmaceuticals - “but I hope it’s not scientists”.

“We need to then identify the key people - my children call them influencers that the young people hear best from. We then need to make sure that our messages are packaged through those individuals so that we can get as many people vaccinated as possible.”

She said the evidence showed that, globally, vaccine acceptance is dwindling, and has come down from more than 70% last year to less than 50% in 2021, and SA is no different. This is a cause for concern because it's at a time where we want to get people vaccinated. In SA, vaccine acceptance raged between 52% and 82%, depending whether you are in rural or urban areas.

She said the number of vaccine-hesitant people in SA was only 20% and this was the group that needed to be reached out to. The acceptance differed by socioeconomic status, and political and religious views.

How long do the side effects of the Covid-19 vaccine last?

Vaccine side effects can last up to three days, or a week at most.
News
1 month ago

South Africans are concerned about the efficacy of the vaccine, safety, thoroughness in the development of Covid-19 vaccines and government delays in vaccination. One of the myths and conspiracy theories, particularly in the Christian community, was that the vaccine represents the “mark of the beast” while others believed it was about depopulation. Some South Africans want to wait and see what happens to those who are vaccinated while others want more information.

“As we are asking whether to vaccinate or not to vaccinate we need to know what the issues are and how to manage those issues,” said Mlisana.

Prof Linda-Gail Bekker, co-lead investigator on the Sisonke trial, said data from Sisonke, which investigated the J&J vaccine's efficacy among healthcare workers, showed that while the vaccine is not 100% prophylactic and does not stop infections, just like other Covid-19 vaccines, the vast majority of the vaccinated had been asymptomatic or, at worst, had mild infections. Those hospitalised did not require oxygen or intensive care.

“We have had about 4% who were more severe and we have seen some breakthrough deaths.”

Bekker said among the 64 healthcare workers who died, most were women aged between 50 and 64, with the vast majority having comorbidities.”