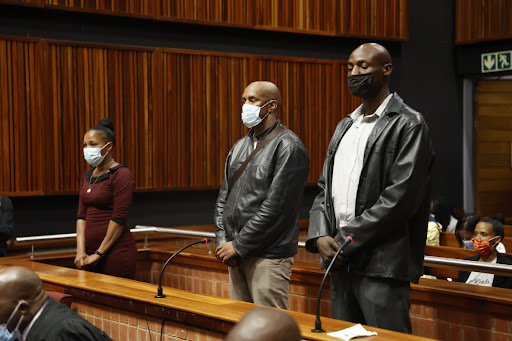 The high court in Johannesburg heard on Wednesday how Const Caylene Whiteboy allegedly planned what should be told to authorities after the shooting of Eldorado Park teenager Nathaniel Julies.

Whiteboy, Sgt Simon Ndyalvane and Sgt Vorster Netshiongolo are facing charges related to the August 2020 murder of the 16-year-old who lived with Down syndrome.

Whiteboy and Ndyalvane have been charged with the murder of Julies. Ndyalvane and Netshiongolo also face counts of unlawful possession of ammunition. All of the accused face a count of defeating the ends of justice, while Netshiongolo is facing a count of perjury. They have pleaded not guilty to all of the charges.

A recording was made by then student constable Mandla Dumisane Sithole, using his cellphone after the shooting of Julies, allegedly by Whiteboy, at a block of flats in Eldorado Park.

The recording mostly supported evidence Sithole presented to court on Tuesday about when the police left the hospital, where Julies was certified dead, and were on their way to the police station.

Court to listen to recording made after Nathaniel Julies was shot

The recording was made by Const Mandla Dumisane Sithole using his cellphone after Julies was shot.
News
1 month ago

Sithole had testified about being a passenger in the police vehicle on the day of the shooting. Three other police officers, including Whiteboy, were passengers.

The defence opposed the playing of the recording but judge Ramarumo Monama ruled that it be heard.

Ndyalvane had asked to be left at the hospital where he said other colleagues would pick him up.

In the recording, inaudible in parts, Whiteboy could be heard allegedly speaking about what story should be told about the shooting.

Sithole testified that the story Whiteboy said should be told was that police received information about a truck in Eldorado Park with stolen car parts, “that we went to check it and when we arrived, there was a shooting between gang members”.

The state asked Sithole whether Whiteboy was the one who came up with this version. Sithole said yes. “Since we were in the car, she was the one who was telling it. This story came from accused 1 [Whiteboy]".

In the recording another passenger, a Const Gosing, could allegedly be heard saying he would assist Whiteboy with the statement and she should not worry.

Whiteboy could be heard asking if the Independent Police Investigative Directorate had been called. She is also heard asking, “I am going to be arrested, ne?".

Sithole, Gosing, a Const Visagie and her colleagues in the vehicle collectively replied, “No”.

The trial will continue on Thursday with cross-examination of Sithole.