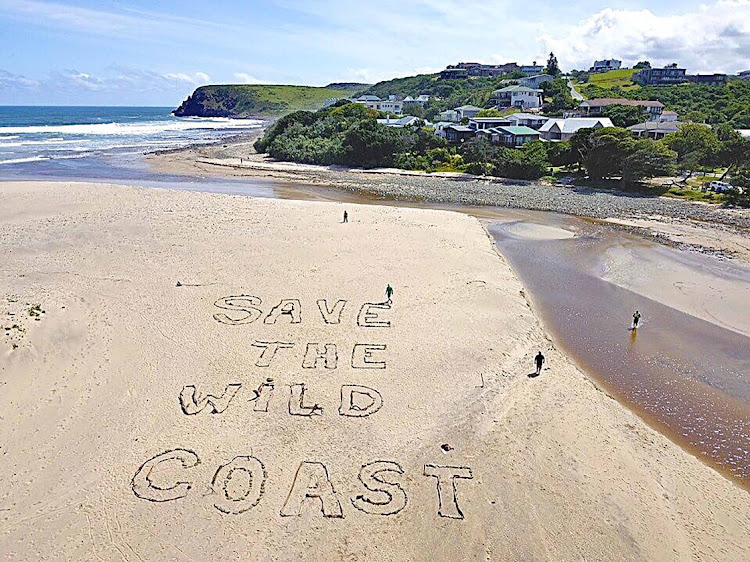 A huge message in the sand for miner Shell which starts seismic blasting on the Wild Coast on November 1, evoking fury over expected massive marine ecosystem damage and die-off. It was made by Dean Knox of Jonginenge and Kevin Harris of Save Nahoon and passersby who got stuck in.
Image: RICHARD WARREN-SMITH

“Go to court, I am not involved.” This was the essence of the response from forestry, fisheries & environment minister Barbara Creecy after 57,364 people signed a petition calling on her to stop Shell’s 3D seismic blasting of the Wild Coast.

Last Tuesday, Shell announced the start of a seismic survey of a 6,0011m² area 20km off the Wild Coast from Morgan Bay to Port St Johns on November 1.

This evoked an outcry, with scientists and researchers saying the 36 air guns fired as one from the Amazon Warrior in massive bursts of sound up to 220 decibels would damage and destroy an entire marine ecosystem, from tiny molluscs to whales.

As the week progressed, more information emerged about mysterious whale strandings after the seismic blasting on the Eastern coastline from 2016 and protests that the environmental impact research was thin, seven years old, and biased in favour of the oil miner.

Shell has responded by saying it followed the law, but it also emerged that exploration rights had changed hands in 2018 and a 2D seismic survey was conducted on the Wild Coast that year. 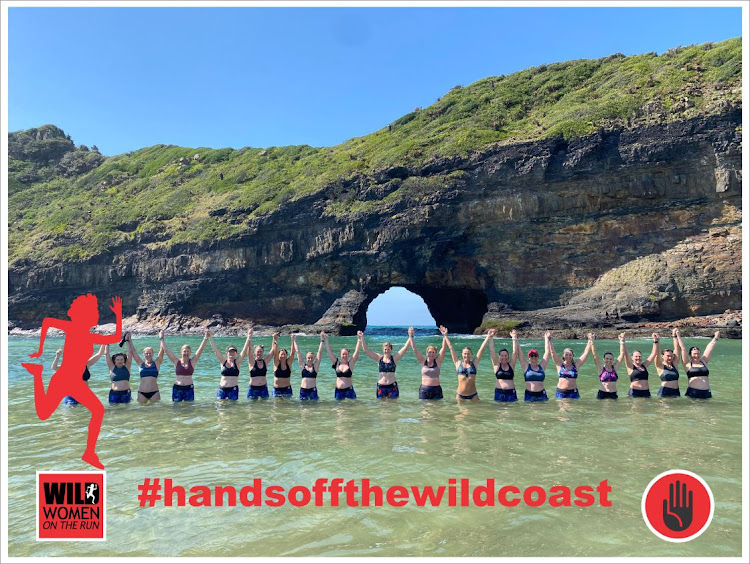 Wild Coast trail running movement, Wild Women led by lawyer and adventurer Kim van Kets have decided to take on Shell and the government over the looming arrival of seismic blasting and oil drilling on the Wild Coast.
Image: SUPPLIED

Protesters in the province called on Creecy to restart the public participation process.

On Friday, Creecy told the Dispatch that the exploration and mining right had been granted in 2013 by the mineral resources and energy department (DMRE) — her department “was not involved in any aspect of this decision-making process for the proposed exploration activities, including the environmental impacts”.

The environmental authorisation granted by the DMRE was “valid and binding until set aside on review by court of law”.

At 11am on Friday a petition posted on change.org by Oceans not Oil headlined “Stop Shell blasting the Wild Coast” headed to  58,000 000 people and was the fastest-growing protest on the site.

A rough count showed that 1,000 people an hour were signing.

Wild Women Wild Coast trail runners issued a picture of themselves in running kit in front of Hole-in-the-Wall with the message #HandsofftheWild Coast. Leader Kim van Kets said: “Shell knows better now than it did seven years ago [when environmental authorisation was granted].

“The public response is way more hectic than anyone expected. There are enough signatures on the petition to table it in parliament. Legal action is being taken. There is protest action planned around the country.

“We need to start the consultation process again from the beginning. Local people will get nothing. The golden goose will be dead when Shell leaves an empty shell in PSJ [Port St Johns].”

Morgan Bay hotelier Richard Warren-Smith said the 2D seismic surveys in 2018 began when a “red ship” appeared “dangerously close to the reef on the point, and was going up and down”.

“It was there for about four days. There was definitely some form of seismic blasting. Then we had our first stranding, a southern right whale, and now the number of whale strandings on the Eastern coastline is up to 18.”

He said the 45-member Wild Coast Hospitality Association was meeting on Monday, and seismic blasting was “top of the agenda”.

“Everybody is absolutely, completely and utterly horrified.

Siseko Yelani, MD of Uncuthu Tours, said: “We depend on hospitality and tourism. The survey will kill our province.”

Imonti Tours operator Velile Ndlumbini said: “The survey will disrupt the sardine run and marine life and tourism will perish.”

The news that Shell plans to conduct a large-scale offshore seismic survey for gas and oil deposits along the Eastern Cape's Wild Coast has drawn ...
News
2 months ago

While Shell is sailing into an environmental storm over its plans to harvest gas and oil off the pristine Wild Coast, its profits are on a smooth ...
Business
2 months ago

Oil giant Shell has been accused of dusting off a 2014 environmental impact process and rushing into its seismic survey on the Wild Coast on ...
News
2 months ago

Big Oil has come to the Wild Coast. Shell has announced it will start a seismic survey in search of oil or gas deposits from Morgan Bay to Port St ...
News
2 months ago