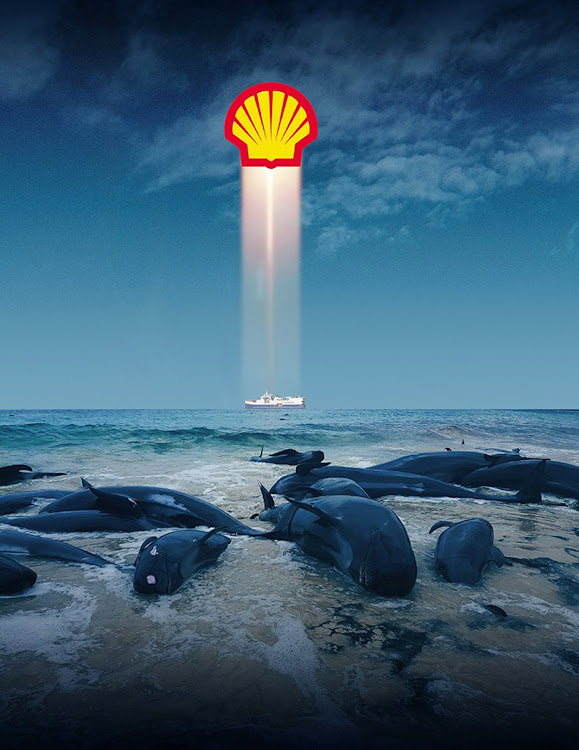 POURING OUT THEIR ART: From teens, to busy moms, to activists and finally, artist Dave Edwards, people of East London, East Coast, the Wild Coast and Cape Town used creativity to channel their feelings, some angry and militant, some heart-broken and heavy with despair and some hauntingly grotesque. Here is some of artwork they produced for stickers, online, posters and just for the sake of marine life.
Image: Dave Edwards

One of the most ferocious arguments on the Eastern coast of SA reached higher decibels when lawyers for ocean lovers and scientists served letters on two ministers calling for an immediate halt to seismic blasting on the Wild Coast by Shell.

Reaction from the ministers was slow to come, with only Creecy's spokesperson Albi Modise saying they were busy having a read.

But he said the contested environmental authorisations for the gas and oil exploration rights had been completed in 2014 and diligently carried out and with proper public participation.

In two weeks, real public participation exploded as numerous interest groups formed, connected and started to fight back in an extraordinary spectacle of apolitical collaboration.

The public barrage aimed at Shell as it rides in again to blast the Wild Coast oceans in its second search for gas has brought up a new ecological ...
News
1 week ago

From the Nahoon Reef car park where surfer Peter Jones set up a Save the Coast WhatsApp group, angry and disbelieving members of the public have piled in from Cape Town to Durban and there are likely to be protesters at the doors of Shell's London offices.

The seismic oil hunting ship, Shearwater GeoServices' Amazon Warrior, received a public roasting when it arrived at Cape Town port at the weekend, and chose to hang anchor before slipping into port on Monday.

But the most watched vessel on the entire eastern seaboard slipped anchor on Wednesday and is making its way to the Eastern Cape with its load of air guns which researchers say damages, even decimates, all marine life.

It all comes down to the wire next Sunday, December 5, when activists across the seaboard, from Save the Coast based in East London, to Oceans Not Oil, Greenpeace and many others, have urged all people to head to their nearest beach and express their outrage.

Pamphlets, stickers, and a Burning Society rock concert in Gonubie are a few of the visual signs of rage, many focusing on dying or dead whales, or portraying the Shell logo as an oil-spattered death head.

They said any seismic exploration would be unlawful because the oil extractors did not have the legally required environmental authorisation, people who signed on as interested and affected parties were denied effective participation, and four pieces of new legislation passed since 2014 were ignored, as was the role of the state as custodian of coastal public property.

Should the minister refuse to issue a protection notice, stop the blasting and order a new and legal environmental authorisation by Friday, they would go to court.

Mantashe was told to suspend the Wild Coast exploration rights his department granted to Shell and Impact Africa in defiance of the National Environmental Management Act as they did not have a valid environmental authorisation.

The lawyers said the “second renewal” of the exploration right was unlawful because registered interested and affected parties were not notified that the government had in fact even granted the right in 2014, were not told that Shell had acquired 50% of the right in recent years, and that the DMRE minister had consented to the deal, or that the exploration right had even been renewed.

It was only recently that the interested and affected people on the list were told for the “first time” that exploration would go ahead on December 1.

A public campaign to stop the seismic blasting ship Amazon Warrior from reaching its next work destination — the Wild Coast — has spurred deep-sea ...
News
2 weeks ago

With the changes in law, it is now illegal to carry on without environmental authorisation until a “full scoping and environmental impact assessment is carried out”.

They then listed three pieces of research which found that the air gun blasts were “in excess of 260 decibels”, capable of being heard thousands of kilometres away.

There were five pieces of research listed which found that the blasts killed, injured, disturbed and interfered with animals from mammals to zooplankton, and disrupted the use of reefs by fish. Damage was generally felt “across the entire marine ecosystem”.

The lawyers for ski boaters then added an additional source of damage — “multibeam echosounders” emitted by survey ships that also change the behaviour of short-finned pilot whales.

They said that when copies of the exploration right and “each renewal application” were received by  interested and affected parties, a 30-day appeal period stipulated in law would be in place.

Big Oil has come to the Wild Coast. Shell has announced it will start a seismic survey in search of oil or gas deposits from Morgan Bay to Port St ...
News
1 month ago

Mantashe was told to order the gas explorers to stop all activities until a legal environmental authorisation had been granted. He had until noon on Friday November 26 to take action or come to court to argue the case.

Both departments have consistently claimed that the authorisation was legal and compliant.

Shell declined an offer for 500 words of uncontested reply, and requested questions in writing but these were not received.

Cape Town residents will hit the beach on Sunday in protest against Shell's offshore exploration plan along the Wild Coast.
News
2 weeks ago