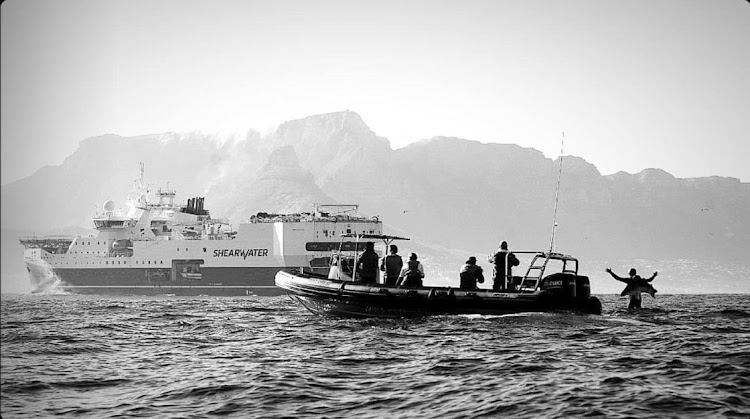 From the rural heartland of the Wild Coast to the urban tip of the Cape, protest battle lines are being drawn in the public campaign to stop Shell from its seismic survey of the Wild Coast oceans in its drive to drill for new oil and gas deposits.
Image: thehumansnarrative

Shell is, for now, free to proceed with its seismic survey of the ocean off the ecologically sensitive Wild Coast after four environmental and human rights organisations today lost their legal bid to interdict it from doing so.

Border Deep Sea Angling Association (BDSAA) and the Kei Mouth Ski Boat Club together with human rights law agency Natural Justice and environmental warrior organisation, Greenpeace says the seismic surveying causes immense damage to marine life and had hoped the court would interdict the company from pursuing the survey under an exploration right obtained in 2014 and subsequently twice renewed. It maintained the ER was awarded unlawfully in breach of the public’s rights and say it, and both the renewals, should be declared invalid. They will in January seek to review and set aside both the original decision and the subsequent renewals

In the meantime, they had hoped to stop Shell via the urgent interdict from proceeding with its seismic survey until the review application could be considered. That hope was dashed at 9.35am today.

We speak with John Rance, chairperson of the Kei Mouth Ski Boat Club. When plans for seismic exploration for oil and gas were mooted in 2012 and 2013 he was Chief Environmental Officer for Border Deep Sea Angling Association, which was among the first organisations to oppose Shell's plans

But, while Govindjee found that his prima facie view was that the four organisations may enjoy success in their review application of at least the second renewal of the exploration right in 2021, in the urgent application they had failed to produce evidence that there was a genuine apprehension of irreparable harm to the marine environment particularly given the mitigation measures that Shell would put in place  in line with the Environmental Management Programme plan (EMPr). Shell had indicated that it had already spent millions of dollars preparing for the seismic survey. If the interdict was granted this would be lost and it would be in contractual breach of an exploration right obtained “years ago”.

Govindgjee said weighing up massive financial consequences against the “possible harm to the environment” had been an “invidious task” but in the end, the evidence favoured Shell that with mitigation processes in place that irreparable harm would be minimised.

But, all is not lost for environmental organisations, as there is another urgent interdict that was launched late this week.

In those court papers, it is argued that Shell required an environmental authorisation (EA) in terms of the National Environmental Management Act for this survey.