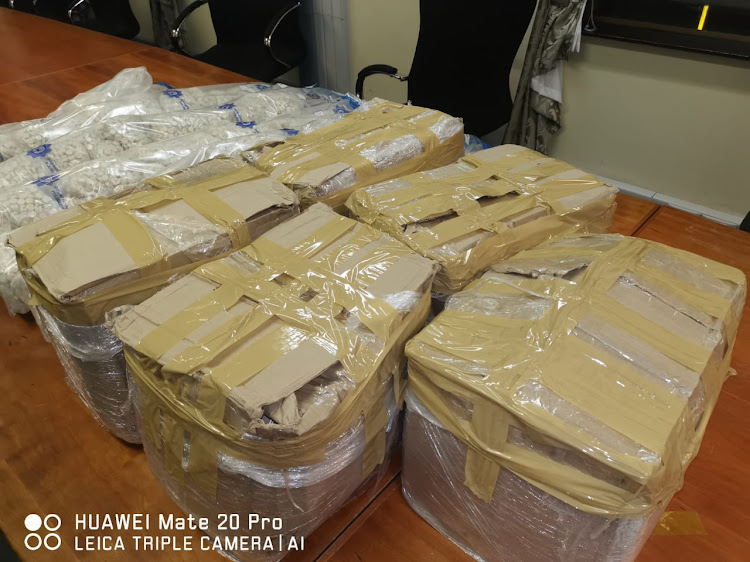 Western Cape police confiscated R5m worth of Mandrax tablets on board a long distance bus on Friday morning and arrested one suspect.

The drugs, which are suspected to have been destined for Cape Town, were intercepted in Mossel Bay during the early hours of the morning. Provincial police spokesperson Capt Malcolm Pojie said police got a tip-off from a bus inspector.

“The vigilance of an inspector attached to a long distance public transport company, who alerted the Da Gamaskop police early this morning, ensured a substantial consignment of Mandrax with an estimated value of more than R5m was confiscated. A 51-year-old man finds himself behind bars for alleged dealing in drugs and a charge of bribery,” said Pojie.

Customs officers have seized 67 pieces of calcium hydroxide used to produce crystal methamphetamine, commonly referred to as “ice” or “tik”.
News
8 months ago

“At about 3am the inspector noticed a suspicious number of sealed boxes in the luggage compartment of the bus and decided to do a proper inspection when the bus stopped at Voorbaai in Mossel Bay. He ensued with a search and found the boxes concealed a consignment of what seemed to be Mandrax.

“He notified the police, who responded rapidly and confirmed the contents to be Mandrax tablets. Subsequent to the find, members arrested a 51-year-old foreigner to whom the consignment was directly linked. The drugs were confiscated and handed in as evidence.”

Pojie said the suspect, who allegedly “offered a substantial amount of cash to the arresting officer in an effort to be released”, will appear in the Mossel Bay magistrate's court on Monday.

“Detectives attached to the provincial organised crime investigation are investigating. The preliminary investigation indicates the drugs were probably destined for delivery in Cape Town,” said Pojie.