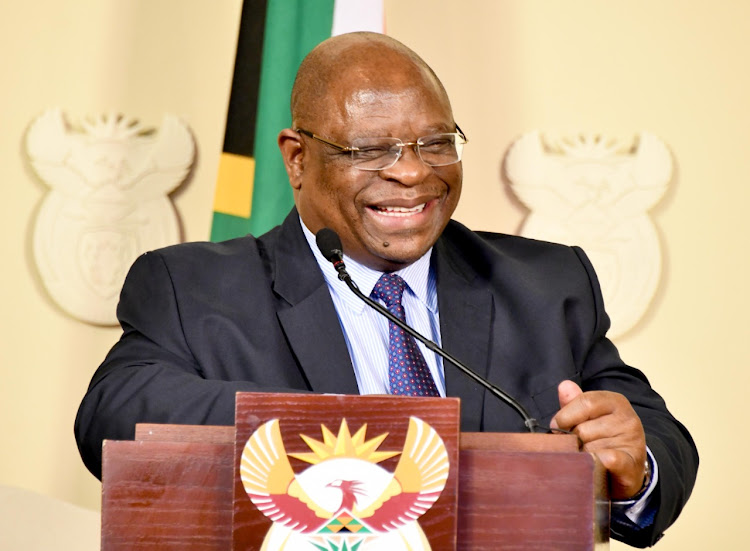 Acting chief justice Raymond Zondo at the release of part 1 of the state capture commission's report at the Union Buildings on Tuesday.
Image: GCIS

No self-respecting theatre critic would dream of reviewing a three-act play during the interval at the end of the first act. But that is what one is compelled to do after the state capture commission released part 1 of its inquiry report. This is more so because those implicated by its findings will be doing all they can to undermine the credibility of its reports.

And in keeping with this dramatic theme, spoiler alert: My view is that deputy chief justice Raymond Zondo, who chaired the commission, has nailed it.

In response, many will ask the question: has he really? And, even if he has: so what?

For those with open eyes, the denuding of democratic state legitimacy was uncovered and the key protagonists – both perpetrators and victims – identified

In light of the apparent weaknesses in SA’s state capacity and institutions, there is understandable scepticism as to whether the government has the technical capability, let alone the political will, to implement the many recommendations that are emerging from the painstaking labour of the deputy chief justice and his small band of support staff and lawyers.

President Cyril Ramaphosa described receiving the report as a “defining moment” in SA’s history. It could yet be so. But only if the work of the commission leads to decisive action and systemic reform.

Without this the Zondo commission will merely have been an exercise in catharsis — not the first steps to delivering justice and accountability.

The hearings themselves, and the extraordinary range of evidence that was adduced before the commission, certainly provided catharsis, but also ‘truth’. For those with open eyes, the denuding of democratic state legitimacy was uncovered and the key protagonists — both perpetrators and victims — identified.

The democratic state was captured; key institutions were looted as vast sums of public money were stolen. Former president Jacob Zuma and his motley network of exploited and exploitive allies were responsible.

That much is abundantly clear from just part one of Zondo’s report. Now they must be held fully to account. Justice will need to be done.

What is in it

Zondo was appointed to chair the commission almost four years ago in January 2018. This was after then-president Zuma had tried and failed to prevent it from being established as a part of the remedial action required by then public protector Thuli Madonsela in her October 2016 State of Capture report.

The commission’s first hearing was six months later. Thereafter it sat for more than 400 more days, interviewing 300 witnesses and yielding 75,000 pages of transcription.

In all, 1,438 individuals and institutions have been implicated, according to the introduction to the document published on January 4.

Acting chief justice Raymond Zondo has voiced "grave concern" over the hammer attack at the country's apex court and says the security of the ...
News
5 months ago

Given the cost of the inquiry — and the 1.7-million pages of evidence — a further question arises: was it worth the time, effort and expense?

Having read through the 874 pages of this first part, a number of notable features emerge.

First of all, it is lucid and cogent, despite the regrettable absence of an executive summary. The public will have to wait until the publication of part 3 of the report at the end of February to review the executive report.

Despite this unusual inversion, the executive report will still matter a great deal, and will require skilled wordsmithery if it is to provide the public with a clear storyline. This will, in turn, help ensure that the report remains ‘alive’ in the public eye and does not get pushed into the background by other events — as has happened with similar reports in the past, such as the Asmal report on Chapter Nine institutions as well as the Farlam report on the Marikana massacre.

To allow the report to gather dust would be a huge waste of the investment in the Zondo commission.

Gordhan vs Moyane was a clash of egos that had nothing to do with state capture: Zondo report

According to state capture commission chair Raymond Zondo, Pravin Gordhan and Tom Moyane simply could not stomach each other, and their exchange at ...
News
5 months ago

Despite the absence of an overarching narrative summary, each chapter of part one presents an intricate and fascinating account of how three public entities — SA Airways (SAA), the government’s information arm (GCIS) and the SA Revenue Service (Sars) — were systematically ‘captured’ with criminal intent, and how misinformation, both through the diversion of public funds to a puppet-media organisation, The New Age, and the subversion of GCIS, was used to try to cover up what was going on.

There were notorious key ringmasters, some well known already. These include Zuma, former SAA chair Dudu Myeni and Mzwanele Manyi, Zuma’s current spokesperson and the man who was helicoptered in to head GCIS after the incumbent Themba Maseko was summarily dismissed, according to the report, at the behest of the Gupta family.

But, now, a much wider cast of accomplices and useful idiots are exposed.

Private entities, such as the consulting firm Bain, where the evidence of whistle-blower Athol Williams is applauded by Zondo, were also deeply complicit.

Second, it reads like a legal judgment, which is how it should be. The concern was that Zondo might fail to grasp the nettle and either shirk the most difficult issues or fudge its findings — as the Marikana massacre report did, on the core issues such as police culpability in the murder of the miners. He has not.

Assisted by some trusted former judicial colleagues, but under his attentive eye, Zondo has recognised the need to be both specific and precise. As a mountain of evidence was combined and the report constructed, the strategy was to provide a sound basis for prosecutions. The dots have now been joined.

A vast database of evidence can now be placed at the disposal of the Directorate for Priority Crime Investigation, known as the Hawks, and the National Prosecuting Authority.

In due course, no doubt, the legal coherence and rationality of the report will be tested in court. There will be numerous judicial review applications that will seek to obscure the picture and delay justice. It may be another four years before the whole process concludes — the completion of the commission’s work is just the start.

Third, flowing from the findings, part one of the report offers concrete recommendations. Some recommend that certain implicated persons are either investigated or prosecuted. In other instances, the report addresses institutional failings or legal gaps.

So, for example, in chapter 4 of this first part — on public procurement — Zondo recommends that a new institution be created to which whistle-blowers can go (a Public Procurement Anti-Corruption Agency), and, furthermore, that the new agency have authority to negotiate a financial incentive for potential whistle-blowers.

"The ultimate responsibility for leading the fight against corruption in public procurement cannot again be left to a government department or be ...
News
5 months ago

These are very concrete recommendations. They should be taken seriously, but they are not uncontroversial, and will require further debate.

Nonetheless, what Zondo is doing, in addition to providing the evidential bedrock so that those responsible can be held criminally to account for their abuse of power, is setting out how the governance system needs to be strengthened. By the time part three is published at the end of February, a substantial reform agenda will have been laid out.

Even with two acts of this play to go, it is reasonable to conclude that Zondo has played his part. Now it will up to the government to deliver, and for the public, civil society and the media to ensure that it does.

But there will be many more twists in the plot. There will be lawfare, attempts to subvert the criminal justice system, which is still recovering from state capture. The power struggle within the governing ANC in the run-up to its five-yearly national elective conference at the end of this year will be even more bloody as a result.

If the late Archbishop Desmond Tutu was the moral compass of the nation, then Zondo is constructing an ethical map. How SA navigates its course in the coming years will define its long-term future.

— Richard Calland is an associate professor in Public Law, University of Cape Town

This article was first published in The Conversation.