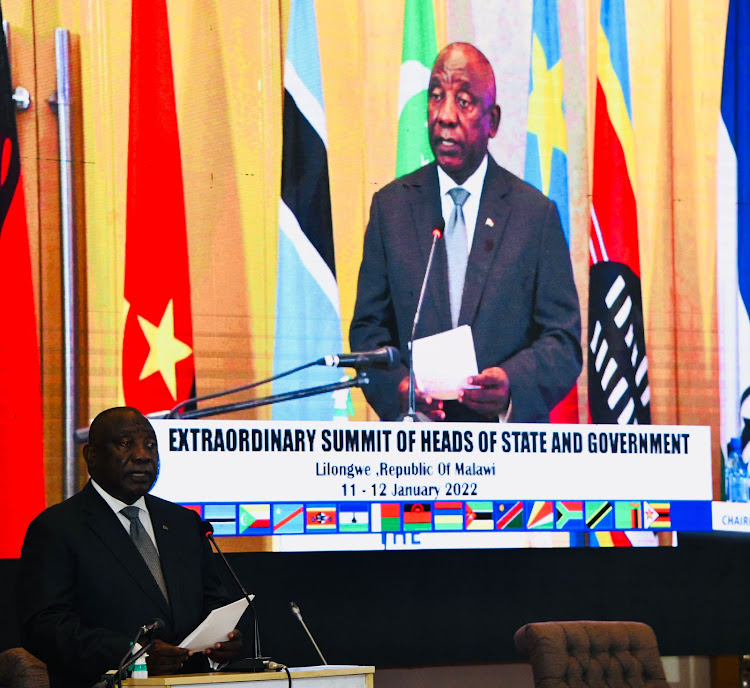 President Cyril Ramaphosa and his regional counterparts at the extraordinary summit of the heads of state and government of Sadc in Malawi.
Image: GCIS

Southern African Development Community (Sadc) leaders have agreed to extend the deployment of troops in terrorist-ravaged Mozambique in an effort to bring about stability in the province of Cabo Delgado.

“Summit noted the good progress made since the deployment of the Sadc mission in Mozambique and extended its mandate with associated budgetary implications, and that it will continue to monitor the situation,” Sadc said in a statement on Wednesday.

President Cyril Ramaphosa and his regional counterparts met at the extraordinary summit of the heads of state and government of Sadc in Malawi where they deliberated on Wednesday over the deployment of troops in Mozambique.

When the regional leaders met in October last year they agreed to extend the Sadc mission in Mozambique (Samim) deployment until January 15 at a cost of almost R1bn to the SA taxpayer.

The SA military has lost a member deployed in Mozambique after he was shot during an ambush.
News
1 month ago

On Wednesday leaders considered a report of the organ troika summit plus personnel-contributing countries (PCCs) and commended the Samim leadership and the troops for conducting successful operations since their deployment to the mission in Mozambique in July 2021.

“Summit expressed deep condolences and sympathies to the countries and families of personnel who lost their lives while on deployment and wished those wounded in action a speedy recovery.”

TimesLIVE reported in December that a South African soldier, deployed in Operation Vikela, was killed when forces came under attack from insurgents in an ambush in the area east of Chai village.

Member states that have provided personnel, equipment and financial support, as well as making additional pledges towards the deployment of the mission, were also applauded for their efforts and commitment to bringing peace and stability despite the Covid-19 pandemic.

“Summit commended the Sadc region for its unwavering commitment to peace and security, and for using its own resources in addressing and combating terrorism in Cabo Delgado, which is a unique precedent on the African continent.

“Summit commended acts of solidarity exhibited in the form of food pledges made by Malawi, SA and Zimbabwe to alleviate the suffering faced by the internally displaced people in the Cabo Delgado province in Mozambique.”

The SANDF on Thursday denied claims that rotten rations were served to soldiers deployed in the Sadc mission in Mozambique.
News
2 months ago

Furthermore, it approved the framework for support to Mozambique in addressing terrorism which outlines, among other things, actions for consolidating peace, security and socioeconomic recovery of Cabo Delgado.

“Summit acknowledged the expression of gratitude to Sadc by Mozambique for the continued regional support to combat acts of terrorism and violent extremism in some districts of Cabo Delgado Province, despite the limited resources and the current challenges imposed by the Covid-19 pandemic.”

It also commended Mozambique for initiating and implementing the Cabo Delgado reconstruction plan to enable the delivery of social services and amenities and welcomed the initiative of convening an international conference to support the economic and social reconstruction of Cabo Delgado.