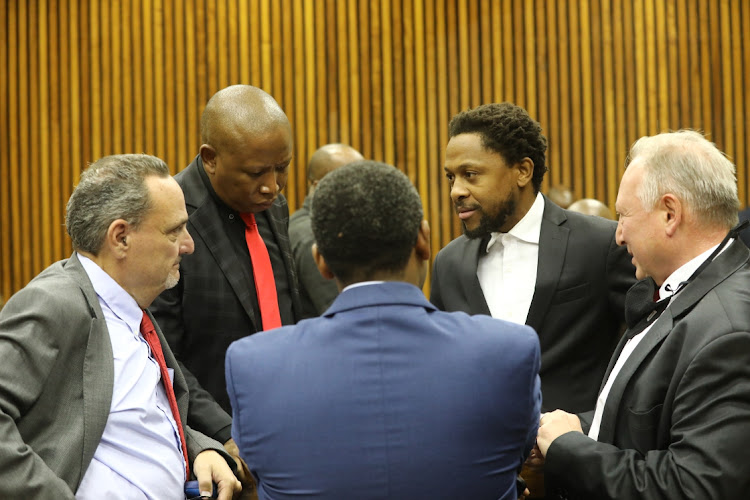 Mbuyiseni Ndlozi and Julius Malema consult their legal representative during an adjournment at the Randburg magistrate's court in their assault case over an incident during Winnie Mandela's funeral in 2018.
Image: SUNDAY TIMES/ THAPELO MOREBUDI

The final state witness in the assault case of EFF leader Julius Malema and party MP Mbuyiseni Ndlozi is expected to appear when the trial resumes in the Randburg magistrate’s court on Friday.

Malema and Ndlozi are charged with assaulting a police officer, Lt-Col Johannes Jacobus Venter, at the funeral of Winnie Madikizela-Mandela in April 2018. The incident was captured on CCTV footage.

They have pleaded not guilty to the assault charge, which they claim is part of a political agenda.

When the case resumed last month, a witness from the military police, staff sergeant Gilbert Maphisa, took to the stand.

LISTEN | 'I must not be the first one to catch them,' says Malema

Julius Malema visited the Gardee family home after the discovery of Hillary Gardee's body earlier this week.
News
1 month ago

Maphisa, who was stationed outside the cemetery on the day, was responsible for traffic duty, directing vehicles coming into the cemetery.

During cross-examination last year Venter admitted the accused had permits around their necks, but he insisted he did not see a permit on their vehicle.  In October 2020, Venter told the court he went to a district surgeon and his family doctor after the incident but did not obtain a medical record.

Venter also did not go to the police station to obtain a J88 form for his doctor to record his injuries.