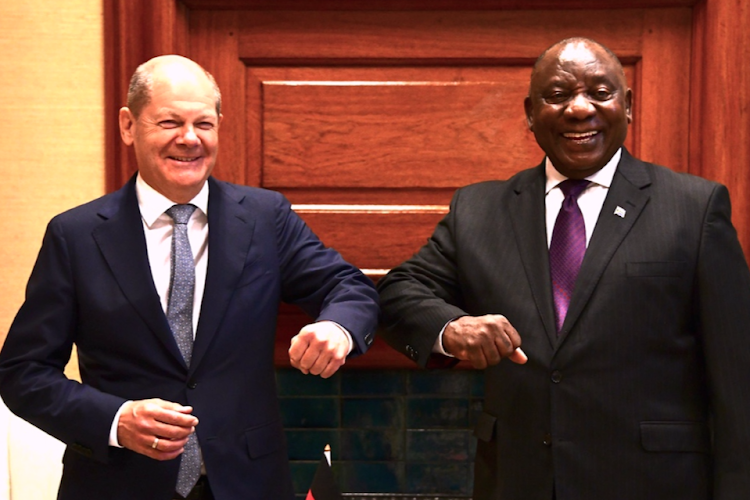 His Excellency President Cyril Ramaphosa holds a Têtê-a-têtê with His Excellency Chancellor Olaf Scholz of the Federal Republic of Germany during an official visit at the Union Buildings in Tshwane.
Image: GCIS

President Cyril Ramaphosa said on Tuesday that “bystander countries” were suffering due to sanctions against Russia and called for talks as the AU (AU) prepared a mission to foster dialogue between Moscow and Kyiv.

Ramaphosa spoke as German Chancellor Olaf Scholz visited SA on the final leg of a trip to the continent that aimed in part to rally diplomatic support for Ukraine.

South Africa has close historical ties to Moscow due to the Soviet Union's support for the anti-apartheid struggle. It abstained from a United Nations vote denouncing the invasion of Ukraine and has resisted calls to condemn Russia.

The European Union has aggressively pursued sanctions and a severing of economic ties in a bid to punish Moscow for its military operations in Ukraine, a strategy which Ramaphosa said was causing collateral damage.

“Even those countries that are either bystanders or not part of the conflict are also going to suffer from the sanctions that have been imposed against Russia,” he said during a news conference in Pretoria.

The war in Ukraine appears to have been at the top of the agenda during President Cyril Ramaphosa and German Chancellor Olaf Scholz’s meeting on ...
News
1 month ago

Africa, which has already seen millions pushed into extreme poverty by the pandemic, has been hit hard by rising food costs caused in part by disruptions linked to the war.

Russia and Ukraine account for nearly a third of global wheat and barley, and two-thirds of the world's exports of sunflower oil used for cooking. The conflict has damaged Ukraine's ports and agricultural infrastructure and that is likely to limit the its agricultural production for years.

Standing beside Ramaphosa, Scholz said he was pleased to have the opportunity to discuss SA's position on the war, but underlined that what he called an attempt by Russia to alter international borders by force was unacceptable.

“Mr President, I think it is important that we continue these discussions intensively,” he said. “We are very concerned about the outcome of the war for Africa.”

Senegal's President Macky Sall — the current chairman of Africa's top political bloc, the AU — said on Sunday he was preparing to visit Kyiv and Moscow to foster peace.

Ramaphosa, who has been invited to attend the G7 summit being hosted by Germany next month, said the only way to resolve the war is through dialogue and Africa “does have a role to play because it has access to both leaders (of Ukraine and Russia).